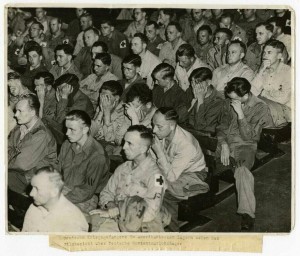 Captured Germans Being Forced to Watch Films from the Concentration Camps

The fifth video from Center for Medical Progress has been released.

The evidence piles up relentlessly.

Every video is more explicit than the previous one.

Every video is more damning.

Every video portrays Cecile Richards and her politician cronies as liars and killers.

Once again, this next video is gruesome and heart wrenching.

The Planned Parenthood workers are seen laughing and chatting away about livers, lungs, limbs, eyeballs and “intact fetal cadavers”–which get top dollar because the researcher can then dissect them and harvest completely intact organs, limbs, brains and virtually every part of the child.

If Germans were made to watch films from the concentration camps, every American should have to watch these films.

Here is the video is you can stand another one.

The worst part of these truths is what is says about us as a nation.