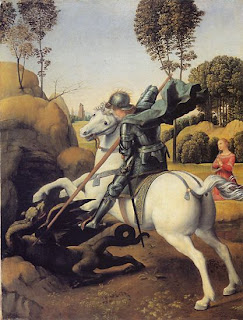 St George–what a perfect patron for England. That noble land where chivalry and gentle manners prevailed! St George– a knight on a white charger! A knight prepared to lance the dragon to defend purity and the fair maiden! St George–more mythical and mystical than any other saint for a country more mythical and mystical than any other!
All the sadder to see fair England dominated by dragons today. The dragon of drunkeness staggers across the land, spewing out fire from his guts. The dragon of greed sits on piles of gold in the lair in the old city of London. The dragon of lust lies sated and weary in the gutters of England’s cities. The dragon of despair stalks through the foggy streets and hunkers down in the alleyways of the ancient university cities. The dragon of doubt guards the doors of the ancient churches to make sure they remain empty.
May Saint George with all chivalrous, courteous and Christian people rise up and pray for England. May Saint George with all chivalrous, courteous and Christian people rise up to fight the dragons that theaten the land. May Saint George and all chivalrous, courteous and Christian people hold the faith in dark times until they finally prevail.
St George pray for us. God save the Queen. God save England–land that I love.
PatheosDwight2007-04-23T17:25:00-04:00April 23rd, 2007|Categories: Patheos|5 Comments