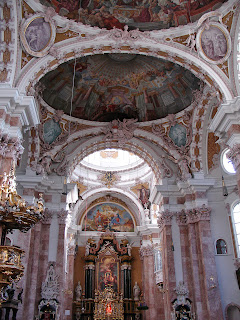 A commenter notes about Benedict XVI’s more exalted taste in regalia that he doesn’t think Peter the fisherman would be comfortable in such outfits.

This is a commonplace argument when faced with the glories of Catholic regalia, liturgy, music or architecture. “What!” says the tourist when faced with an Austrian baroque church, “this is hardly the sort of temple one would expect for one born in a stable.” Another similar argument protests that such rich finery and opulent temples are a waste of money. The expenditure should go to the poor.

We must come back with several trenchant replies. First of all, one must understand the reason for the fine architecture, the rich vestments, the beautiful music and the exalted liturgy. It is there not to show the humble aspect of our Lord’s birth, but his glorious existence today. The Catholic opulence is not show for the sake of show. It is a feeble attempt to remind us of the glory of heaven. It is an attempt to take us into the very presence of the heavenly host. The baroque churches exemplify this best. The plaster, the gilt, the columns, the ormolu, the cherubs and lush paintings are all an attempt to pull back the veil and glimpse the glories of heaven. It is the same for the grand music, the fine vestments and the glorious liturgies. They do not show the humility and humanity of Christ, (the church does this in other ways) but the worship of the King of Glory.

The question is not so much, “Would Peter the fisherman be comfortable in richly embroidered regalia?” but “What does Saint Peter the Great Apostle look like where he is now?” I doubt if he is wearing a fisherman’s smock and smelling of yesterday’s catch. To be sure, he is now clothed in the radiance of Christ himself. Now he wears the matryr’s crown, he is robed in white and no doubt if we could see his heavenly vesture they would make the pope’s fine robes look like beggar’s rags. The Pope does not therefore show us Peter the Fisherman, but Saint Peter the Apostle–more glorious in holiness than we could dare imagine.

There is more to it than this: what shall we make of the argument that the money should be given to the poor? We must be careful here. That is the argument of Judas. We must remember when the woman came and broke the vessel of rich ointment over the feet of Jesus. What a costly and extravagant act of worship, and yet it was fitting and it was Judas who would have stopped such worship.

Remember also, that the finery and the opulence and grandeur is not the only display the church makes. While the pope displays the power and the glory and the destiny of the saints, the poor missionaries of charity display the foundation for that power and glory. While the fine liturgies display the great grace of God active in the world, the poor missionaries, friars and those persecuted for their faith display the source and true foundation of God’s action in the world. Everywhere the church is both in the gutter with the lowest of humanity and yet reminding us of our destiny among the stars.

Both are needed if we are to be true, and both were there from the very beginning. The shepherds worshiped at the stable with their simple gifts, their crude poverty and their humble faith, but the kings were there too. With their fine robes, and their costly gifts they made an offering worthy of the King of Kings.