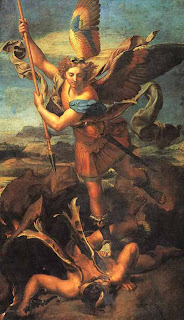 In conversation with a young seminarian last week we were discussing the problems within the Catholic Church. My own opinion is that the problems have little to do with all the external things we focus on: choice of hymns, type of liturgy, church architecture, preaching styles, etc. etc. etc.

Far be it from me to rain on anyone’s parade. I like being happy as much as the next person, and despite my curmudgeonly moments, I think I am a pretty happy and contented person. However, to put human happiness in this world as our main raison d’etre is a flawed and fatal basic assumption.

Everything would change. Seminaries would become boot camps. Sermons would focus on the strategies for battle, the seriousness of the enemy and the need for constant vigilance. Confessionals would be full with the wounded needing healing. Liturgy would be a poignant and beautiful glimpse of our heavenly home–enough to refresh us and remind us why we are fighting.

When we talk of the Church Militant this is what it means–not necessarily that we’re arming ourselves for battle against the heretics or the infidels–but that we are putting on the whole armor of God, to fight against the powers of darkness in this world.