Guardians of the Galaxy – Too Much of a Good Thing?

Guardians of the Galaxy – Too Much of a Good Thing? 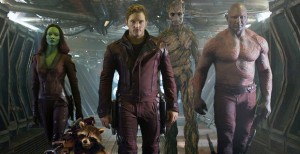 My fifteen year old son is the one who encourages me to see superhero and science fiction films.

So today on my day off we tootled off together to munch popcorn and enjoy Guardians of the Galaxy.

It was corny, but the corn popped.

In other words it was salty and crunchy but not much more than puffed air and corn.

I’ll leave others to give you the full review. Here’s Steve Greydanus giving a good review and a round up the plot and characters.

I keep worrying that the glut of superhero, science fiction, fantasy films isn’t dulling our imagination. Are we getting too much of a good thing?

I think so. For example, there are only so many story lines that work. How many movies do we have to see where the good guys are facing global destruction from an alien mother ship and they have to make their way into the mother ship and destroy the magic crystal, the computer main frame, the death star whatchamacallit or the one ring that rules them all? You know how it goest–the underdogs are being defeated at the very end by insurmountable odds then the unlikely Frodo or Luke Skywalker or in this case, Rocket Racoon saves the day by dropping the magic crystal down the ventilation chute to destroy the memory board of the mother ship?

Not only are the same plot lines used over and over again, but the characters are the same cardboard cut outs. This time the wise cracking outsider was not Han Solo but a raccoon. Wookie was a big tree. How many ents can we enjoy?

There’s more to my criticism than this. Myth uses the same plot lines and stock characters because that is the language of myth. The fact that we see and recognize these is not really the problem. The problem is that they are produced not from a deep shared culture, but out of grandma’s dress up box. It’s like the writers simply mine the great mythic tradition to grind out yet another summer blockbuster.

Our capacity for myth is dulled. We have eaten too much mystical, mythic ice cream.

As one of my sons said after viewing a Narnia movie, “They’re all the same. There’s always a dragon, a magician and a lost boy.”

With modern digital technology everything is there on the screen. When we read books–even comic books–our imaginations were engaged and we became locked into the story in a different way.

Now we just sit back with the popcorn and pepsi to enjoy some puffed air snacks and bubbly sweet drink.

Then we burp, chuckle, wonder at the explosions for a moment then wander out into the sunlight and the real world.

Have we then really experienced the power of myth and fantasy or have we just been entertained for two hours.