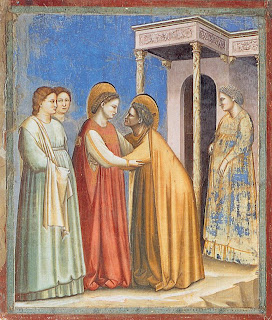 One day last summer I got into a conversation with a woman at our community pool. She was an Evangelical Presbyterian, and was intrigued to hear that I was Catholic. Before long I got all the questions fired at me, and we finally got to Mary. The woman asked why we worship Mary. I said we didn’t, but if you consider who she really is, she must be pretty special right?

I then went on to explain that Mary was the mother of Jesus Christ, and as such she contributed his humanity. Jesus would have looked like Mary, but more than that, since God and Man were perfectly united in him she must have been a uniquely perfect person.

My new friend was shocked. She said, ‘No! that’s not what happened. Mary was just the channel through which God came into the world.’ My Presbyterian friend didn’t even grant that Christ’s human nature came through Mary. A better theologian than myself will be able to pin down exactly which Christological heresy this is. I suspect it is a kind of Docetism or Nestorianism.

Anyway, it shows that unorthodox understandings of the incarnation are still around. The correction for this has always been a proper understanding, and devotion to the Mother of God.

Today we celebrate the Solemnity of Mary, Mother of God.

The term Theotokos was formally accepted at the Council of Ephesus in 431. This was the church’s response to Nestorianism. Nestorius preferred the term Christotokos, indicating that Mary was simply the one who bore the Christ (the anointed One) into the world, and that she was only the mother of his humanity.

The Church fathers said this implied two distinct persons in Jesus Christ: the human son of Mary and the Divine Son of God. They insisted on the term Theotokos as a guarantee of right doctrine concerning the incarnation.

The term is, of course, totally Scriptural. In the story of the Visitation of Mary to Elizabeth, we are told that Elizabeth, filled with the Holy Spirit, says, ‘Who am I that the Mother of my Lord should come to me?’ Not only does Elizabeth call Mary, “Mother of God”, but she does so under direct inspiration by the Holy Spirit.

There is a whole chapter on the title ‘Mother of God’ in the book I wrote with David Gustafson called Mary-A Catholic-Evangelical Debate.