How Tenderness Leads to the Gas Chamber

How Tenderness Leads to the Gas Chamber 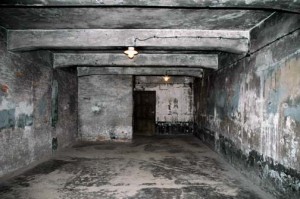 The Gas Chamber at Auschwitz

Flannery O’Connor wrote, “In the absence of faith, we govern by tenderness.  And tenderness leads to the gas chamber.”

The liberal West has been driving on the fumes of Christianity for about a century now and the car won’t go much further.

When the only virtue left is tolerance and tenderness everybody gets away with everything and there’s no one to put on the brakes.

But finally people get fed up. They get tired of being compassionate, nice, forgiving and generous. Because the Christianity that told them to be kind, compassionate and tender has died out they ask themselves why they should continue to be compassionate, generous, kind, nice and forgiving.

From being tenderhearted and tolerant they do a sudden shift and wonder if tenderness is the only virtue left why they ought to be tender at all.

So a leader comes along who promises to make their nation great again. He promises to do something about the false tenderness. He promises to have some backbone and deal with the threat. He says, “No more Mister Nice Guy” and he means it and the people cry out for him to be their leader.

The first thing he does is he brings law and order. The police and the national guard are his friends. Continue Reading