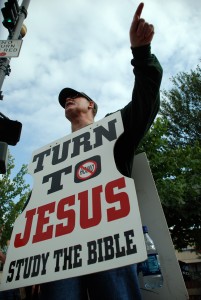 You can ask me. I’m a Bob Jones graduate remember?

When I was at Bob Jones the term “fundamentalist” was only just beginning to get traction as a pejorative term. The Protestant fundamentalists at Bob Jones wore the label with pride. It set them apart from the Evangelicals they considered to be sweet, soft and spineless. Those types were called “neo Evangelicals” and went to Wheaton and thought Billy Graham was okay.

In fact the term “fundamentalism” belongs originally to the conservative Protestants.

Fundamentalism as a movement arose in the United States, starting among conservativePresbyterian theologians at Princeton Theological Seminary in the late 19th century. It soon spread to conservatives among the Baptists and other denominations around 1910 to 1920. The movement’s purpose was to reaffirm key theological tenets and defend them against the challenges of liberal theology and higher criticism.[11]

The term “fundamentalism” has roots in the Niagara Bible Conference (1878–1897), which defined those tenets it considered fundamental to Christian belief. The term was popularized by The Fundamentals, a collection of twelve books on five subjects published in 1910 and funded by the brothers Milton and Lyman Stewart. These essays came to represent a Fundamentalist-Modernist Controversy that appeared late in the 19th century within some Protestant denominations in the United States, and continued in earnest through the 1920s. The first formulation of American fundamentalist beliefs traces to the Niagara Bible Conference and, in 1910, to the General Assembly of the Presbyterian Church, which distilled these into what became known as the five fundamentals:[12]

If this is the definition of fundamentalism, then I’m a fundamentalist. Adhering to the “old time religion” of a supernatural faith revealed by God to his people is a good thing, and both Catholics and Protestants who keep to the “faith once delivered to the saints” are to be commended. While we believe Protestants follow a reductionist version of Christianity, when they hold to the Biblical basics they are closer to historic Catholicism than they realize, and certainly closer than the modernists who deny these truths.

Fundamentalism therefore is not long simply a signal of adherence to the “fundamentals of the faith.” It is a term that includes not only a faithful belief in the “old time religion” but a set of attitudes and behaviors that are negative and self righteous.

The behaviors and attitudes are fascinating because they are, in effect, a kind of anti religion. Continue Reading