Is Immigration a Pro-Life Issue?

Is Immigration a Pro-Life Issue? 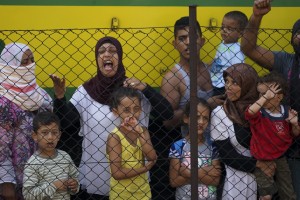 Catholics are excited this weekend at the success of the March for Life and the appearance on the platform of the Vice President and White House advisor Ms. Conway. It seems the political tide may be turning in a pro-life direction.

On the other hand, many Catholics are dismayed by President Trump’s stance on immigration and refugees.

It’s difficult for many to cut through the sensational headlines and biased media to see common sense.

One of the bottom line questions is whether immigration and the refugee crisis is a pro life issue. Some Catholics of a more “progressive” mentality would like to equate the two issues saying, “How can you call yourself pro life while you are neglecting the refugee and the immigrant? Isn’t it pro life to help the homeless, the suffering and the victims of war, poverty and violence?”

This is not to excuse a callous or uncaring approach to the refugee and immigration problem, but it is to put the two problems in perspective.

In fact this should not be an “either-or” proposition and supposing that anyone who is against abortion is a right wing refugee-hating, Islamophobe is untrue and unhelpful.

Saving the unborn and helping refugees and immigrants? We should do both.

When it comes to helping refugees and immigrants we should be both compassionate and clear headed. Our policies should be driven by the desire and duty to help those who are in need, while also recognizing that boundaries are necessary and vetting is necessary.

America is the richest and most powerful nation not only in the world today, but in all of human history. We should have the means, the method and the money to help immigrants and refugees, and to do so in ways that will benefit them in the long term.

Some of those solutions might be for them to settle in the United States, and if that is a win-win for us and them that solution should not be ruled out. However, looking at things in the long term, our resources might be better used to come up with peaceful solutions which help the potential refugees and immigrants in their own homeland and culture.

If we worked with the countries of Central and South America to improve economic, cultural and educational opportunities their people might not feel such a need to migrate North. If we worked to find safe havens for Muslims from war torn countries in other Islamic states, then they would be located in cultures that are closer to home and easier for them.

I am not an expert by any means, but it is worth asking–Do the wealthy and secure countries like Saudi Arabia, Qatar, UAE etc. take large numbers of Muslim refugees? If not, why not?

Such policies are not  racist or biased against any one religion. They are simply common sense. Such solutions would cost less, probably be more effective and help far more people far more quickly.

Should we be involved in helping refugees and immigrants? Absolutely, but we should do so in ways that are not only generous and compassionate, but also smart, effective and efficient.