In the Land of Believers

In the Land of Believers 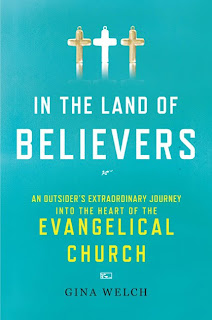 Gina Welch is a California cradle Jewish atheist, daughter of a communist father and feminist mother. She’s a product of Yale and admits that the one sub group of American society she and her friends considered it ok to mock, fear and hate were Evangelical Christians.

As a budding writer she conceived a book project: she would go underground and infiltrate one of the bastions of Evangelical Christianity–Dr.Jerry Falwell’s Thomas Road Baptist Church in Lynchburg, Virginia.

The resulting volume is an extraordinary read. The author is intelligent, open hearted and self aware. She knows the world she is entering is totally alien to her. She is scared of the unknown. She suspects her subjects will be disapproving and judgmental. Most of all she knows she is prejudiced. She expects to do an objective expose and ends up having her world transformed.

Her story is entrancing. As a former fundamentalist myself, I could understand and sympathize as Gina encountered Evangelical-speak, struggled to understand doctrines and customs that seemed bizarre, irrational and unintelligible. I was with her as she attempted to understand and accept a sub culture that seemed tacky, sentimental and stupid. I was also with her as she was genuinely touched by the sincerity, warmth and affection of her new Evangelical friends.

The most winning thing about this book is Gina’s genuine realization that Evangelicals are real, ordinary, complex and likable people. She did well to allow herself to be changed by her experience. It is to her credit that she admits to being touched by what she calls ‘Feeling X’–a real emotional jolt that came through the Evangelical praise music, the powerful preaching and the genuine love and affection of the Christian community. She is eloquent when she speaks of the lack of hypocrisy of the people she met, their genuine care for each other and for the poor and the practical attraction of having a faith that makes sense of the world, a community to belong to and a regular fixed point of faith, support and love in the world. When Gina goes on a mission trip to Alaska and shares the simple joy of a homeless woman ‘getting saved’ we connect in a powerful way to the need for all of us to be open to ‘the other side.’ When she accepts that the Evangelicals ‘soul winning’ is a form of genuine compassion for others she makes a soul leap forward.

I enjoyed this book. In fact, I found it difficult to put down. Did Gina get saved and accept Jesus into her heart? I won’t spoil the ending, but the main disappointment in the book is that Gina did not weave in a more intellectual analysis of Evangelicalism, it’s history or the essential claims of the Christian faith. While she seemed ready to enter into the experience of Evangelicalism it seems she never once considered the possibility that Christianity might actually be true. She read C.S.Lewis’ More Christianity and dismissed it with a wave of the hand.

Gina is a sparkling and gifted writer. She captures the mood and essence of a person or a scene with refined and targeted prose. She has written an attractively positive account of her Evangelical experience, but it is as if she has not engaged with the intellectual argument regarding theism and Christianity because she assumes there cannot be one. The final result is that, as a fellow Christian, one still feels patronized. It feels like a privileged Ivy League preppie has stooped to associate with trailer trash and gone back to her latte sipping friends saying, “You know it was all sooo amusing and interesting and I actually got to like some of them!!”