Is the Crucifix is a Symbol of Hate? 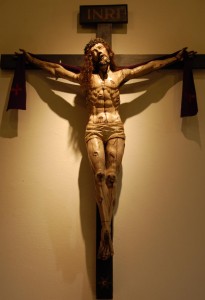 This article reports how the University of Wisconsin/La Crosse have a “bias/hate” reporting system through which students may anonymously report incidents they find offensive. These have ranged from such serious offenses as a professor wearing a sombrero and affecting a Mexican accent to a student writing a blog post about life as a white student on campus. Another student complained about a faculty member “laughing inappropriately” during a college meeting.

The one which is disturbing for Christians is the student who reported the existence of a poster for the Christian college ministry Campus Crusade for Christ. The poster featured a cross which the viewer found expressed oppression and hate toward the LBGT+ community.

There is so much stupidity in this stuff that it is difficult to know where to start. First, are our college students really so thin skinned that they need to be protected from any little thing that might offend them slightly? Are these kids called snowflakes? Secondly, what does this say about freedom of speech and freedom of expression? I thought these college campuses were supposed to be liberal.

This is the one that really tickles me: I was a student at Bob Jones University nearly forty years ago now. During that time BJU was famous for being pretty legalistic. There were rules about everything and if you stepped out of line you were disciplined. It was a strict place and, although my years there were not completely unhappy, it was not a pleasant atmosphere. One of the things which was most unpleasant was that the administration encouraged an anonymous tattle tale culture. You were encouraged to report the other students if they misbehaved and you could do so anonymously.

Nobody likes living in a police state where everyone is a spy.

For years the college atmosphere moved radically liberal. The rule was that there were no rules. College kids were encouraged to make their own choices and behave like responsible adults or not. Now it seems the pendulum swings back and college has once more become a place of legalism, rules and regulations, and everyone is a spy who can report anyone else at any time. The thought police will then investigate.

The frightening difference is that at Bob Jones we had a rule book. Everybody knew what was allowed and what wasn’t. In today’s college police state there is no rule book except the feelings of the next person. You have no idea who you might offend for the most innocent joke or the most harmless poster you put up.

If this atmosphere of policed political correctness spreads, take cover.

If a crucifix on a Campus Crusade for Christ poster is considered “hate speech” what are they going to do when I step out wearing my cassock?

The final irony is, of course, that the crucifix really is a symbol of hate. They crucified our Lord. What could be more hateful than that?