Killing the Way, the Truth and the Life

Killing the Way, the Truth and the Life 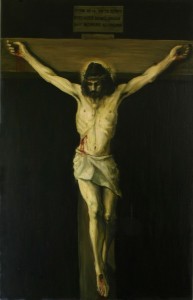 As we enter Holy Week we must remember the huge consequences of the choice made by human beings on that fatal week.

When we chose Barrabas instead of Jesus we chose to kill not just a good man, a wise teacher and a gentle soul. We killed the Way, the Truth and the Life.

We killed the one who not only speaks the truth, but who is the Truth. He is the eternal Word, the Wisdom from on high. He is the logos by who and through whom all things consist. We have killed the source of Truth.

When we do so we are left in the chaos of relativism, subjectivism and the meaningless marketplace of ideas that are no more than personal opinions. When we killed him we killed any chance we had of sanity, for sanity is the adherence to and realization of reality. Without the Truth we are all  madmen locked in the prison cells of our own minds. Without the Truth there is nothing to bring order and peace but the rule of force. When we killed the Truth we killed order and fell into the clanking chaos of Hell.

We are left not only with death of the body, but death of the mind and death of the soul. In killing Life we chose Death–eternal Death, for existence without Life is an eternal and never ending torment of death. We become the zombies of the spirit–the walking dead. Alive forever and yet without the source of life. Heartless, mindless, soul less creatures we stagger through eternity in an everlasting horror as an everlasting horror.

…because out of this week most terrible God wrings a reversal and brings our eternal redemption.