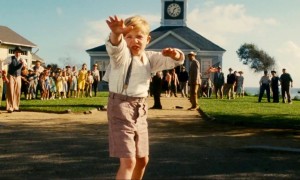 When his dad enlists in the army and disappears to fight the Japanese, seven year old Pepper Busbee’s world is shattered. Wanting to get his Dad back, he learns that magic won’t work, so he turns to faith. A kindly priest played by Tom Wilkinson explains that faith involves not just prayer, but helping others. Pepper’s big challenge is to be friend a Japanese man ostracized by the community and avoid the town bullies. Eventually his prayers are answered in ways he could never have expected.

Little Boy was panned by the secular critics for its blatant religious themes and moralistic storytelling, but I didn’t think it was so heavy handed. Certainly as religious “family films” go this one was far less “inyerface” than many I have seen. What I liked most of all about the film was the way it handled those co-incidences in life that believers see as answers to prayer and non-believers see as wishful thinking.

Pepper’s prayers were not answered in what seemed to be supernatural ways. In other words we didn’t see angels come down like good fairies to make his dreams come true. Instead they were answered through natural occurrences (an earthquake happening at the “right” time, a bomb bearing the name “little boy” or a case of oddly mistaken identity) God’s will and working in the world is much more like that and the film opens the viewers eyes to see this alternative way of seeing. The fact that you could only see God working in this way through the eyes of a child re-inforces the gospel truth that “unless you become like a little child you cannot enter the kingdom of heaven.”

Little Boy drags a bit in the second act and there are some  implausible plot lines, unmotivated characters and undeveloped subplots, but the film is beautifully shot, well directed and acted with finesse and subtlety.

Take time to enjoy this film and get caught up in a story that helps you see the world through God enchanted eyes of a child.