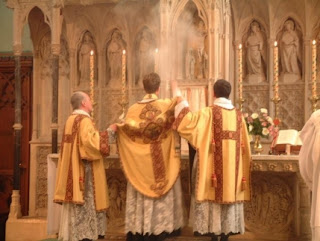 OK, I’m not a liturgical expert. I’m only a convert, and a new priest at that, but I have been trying real hard to understand the attraction of the Latin Mass.
Some time ago I attended a Latin Mass and enjoyed it up to a point, however, I have some questions. Don’t get me wrong. I’m not trying to be critical or unkind. These are genuine questions. Can anyone who reads this blog, and who is keen on the Latin Mass answer them for me?

Now if you’re a Latin Mass afficionado don’t get all hot under the collar. I’ll say it again, this is not an attack.

These are honest questions by someone who is seeking to understand.

UPDATE: The combox on this one is now closed. Thanks to everyone who has contributed