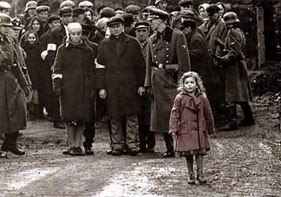 One of the great things about Netflix is the availability of almost any movie you want to see. I ordered Schindler’s List and have just finished watching it with my teenagers. Pretty terrifying, and like the best of Spielberg, the whole film has layer upon layer of meaning.

The subtle interplay of Judaism and Schindler’s Catholicism is worth an essay in itself, but what I found most moving was the accuracy of the portrayal of Schindler’s inner journey to repentance. At the beginning he is the successful entrepreneur interested only in women, money and pleasure. The Jews are cheap labor, and he’s ready to do business. There’s a scene where he goes into the cathedral in Krakow simply to meet some black marketeers and do business.

The real trick in a film is to show the inner journey of the hero in a visual way. It’s tough because the inner journey is, well, inner. It’s invisible. When the hero is struggling with his faith the cheap trick is to get him into a church where he falls down on his knees at an altar and starts talking out loud to a crucifix. This is so lame. Who actually ever does that?

Instead the film maker needs to show the inner transformation somehow. Spielberg does it beautifully in in the life of Oskar Schindler. From the greedy businessman, we gradually we see his transformation. We see him observing the cleansing of the Krakow ghetto. He see his disillusionment with the women in his life. We hear him express his disgust with himself when he says lines like, “I’ve made more money than any man can spend in a lifetime.” All of this gradual way of repentance builds up until he finally returns to a church during Mass. He kneels down in a pew behind his estranged wife and subtly asks her forgiveness. This turning is far more effective for its understatement. From then on we see him engaged totally in the work of saving his Jewish people. In the final scene Schindler makes the sign of the cross, takes off his Nazi party badge (a twisted cross) and lamenting the fact that he did not save more people, comments that the badge is gold, “It’s gold. I could have sold it. I could have saved two more people…”

The film’s a masterpiece. It’s a masterpiece not just because it chronicles the horrors of the holocaust so well (Speilberg’s grandparent escaped from Nazi Germany) but because is shows one man’s response to evil when so many ordinary people chose to do nothing. Most importantly, in my opinion, the film records one man’s journey to repentance and return to his Catholic faith.

It’s such a shame that we consider most films to be disposable. There really are some we ought to buy and watch again and again.