Laudato Si….Too Much of a Good Thing?

Laudato Si….Too Much of a Good Thing? 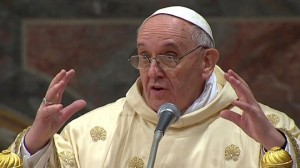 There’s an amusing scene in the film Amadeus in which Mozart asks the rather dim witted Emperor if he likes the opera Mozart has just performed for the first time.

The Emperor ponders for a moment and tries to pin down what he doesn’t like about the work and finally waves his hand dismissively and says, “It has too many notes.”

I must confess that my first impression of Pope Francis’ new encyclical is much the same….”it has too many words”

The problem with Laudato Si is that there is far too much detail. I appreciated the theme he repeated time and again, “Everything is connected”….but did he have to include everything?

He really should have hired a good editor. This is not just a writer’s grumble. It’s important to deliver your message succinctly and powerfully and the pope’s encyclical rambled on and on and on like one of those interminable sermons where the preacher just got up and started speaking.

Consequently, the danger is that the main thrust of his argument will be lost. Eyes glaze over. Deep sighs are heard and nobody reads to the end.

I did persevere to the end, but even so, I was only skimming.

But here’s what I liked about the encyclical. I liked the fresh approach to the ecology question. I liked very much the Holy Father’s passion for connecting the ecology question to our treatment of the poor, the vulnerable, immigrants and the unborn. I also liked the “small is beautiful” emphasis when he was discussing economics. I really liked the mystical aspects to his teaching–where he waxed poetical about the beauty and connectedness of all things. This pointed to the unified vision that all mystics share in which they see the one ness of all things. I think this was the greatest contribution to the debate and a fitting one for a spiritual leader.

I think when the pope started discussing details of global warming, economic systems and political systems he was on shakier ground. Each one of these area are extraordinarily complicated and while I’m not an expert on these matters I got the impression that the pope is not either, and I felt he may well have been repeating popular talking points which may not hold up when examined closely

The whole matter of ecosystems and their relation to energy consumption and economics is extraordinarily complex. So, for example, it’s easy for people to say we should re-cycle more, but then we learn that the re-cycling process is more expensive and uses more energy than the manufacture of new stuff. It’s easy to think that electric cars solve the use of fossil fuels until we learn that even more fossil fuels are burnt to produce the electricity to run the electric cars…

My worry is that the Holy Father and his advisors were in over their head, and if I’m right, I hope it didn’t dissuade the experts from listening to the Pope’s more significant comments. When he was dealing with the large, theological, spiritual and philosophical points he was spot on.

The need for human centered development, the need to check our greed and consumerism, the need to be concerned with the whole human family and the whole planet is vital.

If only the encyclical would have been half the length–been punchy and more to the point.

A few further comments about the reactions to the pope’s encyclical: Continue Reading