The Hand of St Etheldreda

The Hand of St Etheldreda 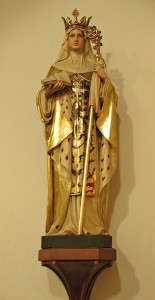 Today is the memorial of St Etheldreda–a saint I have come to admire for, I suppose, not the best reasons.

First of all I rather like her because of her name. Come now, St Etheldreda is a corker of a saint’s name you must admit. Then I like her because she was not only a Saxon queen, but also the founders of a great monastery.

Next I like her because her body was incorruptible for hundreds of years. The shrine of St Etheldreda was a great pilgrimage point in medieval England at the heart of the great abbey at Ely.

The Abbey is now an Anglican cathedral, and when we visited there on our recent pilgrimage tour we observed the empty place in the chancel where her shrine once stood. The pilgrims observed that the Anglicans don’t seem at all ashamed or non plussed by the fact that they now occupy the site where Henry VIII’s troops stomped in, grabbed all the treasures, closed down the monastery and left it in ruins, destroyed St Etheldreda’s shrine, chopped up her relics and threw them on the bonfires.

Furthermore, when you visit the great lady chapel at Ely Cathedral you see how the Protestants vandalized the exquisite stone carvings that surrounded the walls of the Lady Chapel.

The Anglican guide states in a matter of fact way, “the carvings were destroyed in the sixteenth century” or some equally bland fact stated in a blasé way.

Meanwhile our pilgrims were seething that the wholesale iconoclasm, looting and destruction was whitewashed rather like the colorful paintings of the chapel itself were whitewashed.

One of the pilgrims then noticed one of the Anglican information boards which said something to the effect, “Then in the sixteenth century the charismatic and energetic King Henry VIII brought renewal and modernity to the dying church of the Dark Ages.” Hmmmm.

So off we marched to see the hand of St Etheldreda. You can read about our visit and the rest of our day in Norfolk here.

I’ve told the story before, but it’s worth telling again, that when HMQ Elizabeth visited Ely on one of her tours she met members of the ecumenical group in the town. So she shook the hand of the Methodist minister and the Baptist pastor and then met the crusty old Irish priest.

Knowing about the mummified relic of the former Queen and saint,  the present queen said to the priest, “Don’t you think it would be  nice gesture to give the hand of St Etheldreda back to the cathedral?”

He said, “And don’t you think it would be a nice gesture to give the cathedral back to the Catholic church?”