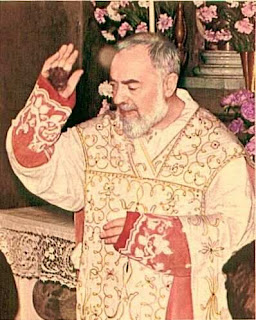 The Daily Telegraph reports that Padre Pio faked his stigmata with carbolic acid.

What next? The insane thing about those who attack the Catholic Church is that they often say that Catholic beliefs are incredible, yet they push out stuff like this.

For goodness sake the man suffered his stigmata for years. What did he have a weekly prescription for carbolic acid? If he wanted to fake the stigmata, why bother with carbolic acid? Wouldn’t a soldering iron have done the job nicely?

One of the mosts refreshing things about the Catholic faith is that (once you’re inside) you realize that what you thought were outrageous beliefs, bizarre customs, faintly risible traditions and downright crazy stories of miracles, visions, incorruptible saints etc. are actually the best and most common sense conclusions based on certain undeniable phenomena.

Nobody went around saying, “I know, let’s have some saints bear the open wounds of Christ in order to make the faithful believe more.” Instead, everyone (the saint included) is rather embarrassed by the miraculous phenomena. They try to keep it quiet and cover it up because, well, they’re humble. When the news gets out the church looks for every logical, natural and sensible explanation first.

Then, unlike crazy arm waving sweating Evangelical fundamentalist charismatic television preachers the church more or less forgets about the miracle. The Church doesn’t go around bragging and promoting the miracle and shouting it from the rooftops. Instead, she tells us to focus instead on the fruits of the saints righteousness. Yes, sometimes, like the liquefaction of the blood of St Januarius or some other marvel, the miracle is proclaimed, but it is never proclaimed as proof of anything, except maybe the fact that this physical world is more rubbery than we thought, that things are open ended, that anything can happen and we oughtn’t be too sure that we’re sure.

Padre Pio faking his stigmata with acid? That’s more difficult to believe than the obvious conclusion that he was holy and the stigmata were just what they seemed to be: a miracle.