Looking for the King

Looking for the King 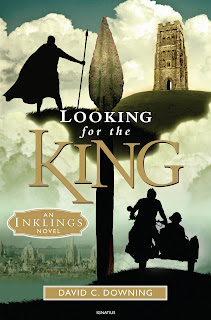 I have just finished David Downing’s excellent Looking for the King. Described as “an Inklings novel” the book is set in England in the 1940s. An American scholar named Tom McCord is on the trail of King Arthur and, along with a pretty sidekick with psychic gifts, winds up in Oxford where he meets C.S.Lewis, J.R.R.Tolkien, Charles Williams and the other Inklings who give them hints and help them on their quest.

Such a book is a risky adventure in itself. It could easily have drifted into a sentimental view of ‘merry ole’ England’ with schmaltzy shallow portraits of a robust, pipe smoking Lewis, a hobbit-like Tolkien and an owlish Williams. Happily, Downing knows his stuff and presents portraits of the Oxford writers that are realistic and well rounded.

David Downing is an English professor at Elizabethtown College in Pennsylvania, an acknowledged expert on Lewis and the Inklings, he brings his expert knowledge of the Inklings and their writings to full flower in his exciting novel. The conversations he concocts are taken from snippets of their actual writings, recorded memories of their friends and insights from their biographies. The source for each tidbit is noted in the back, with on the ground research and all the attention to details that comes with creative sleuth work and true amateur-expert scholarship (that is for the love of it all) Downing brings to life the Inklings and their world.

All of this is done in the context of an exciting quest story combined with a romantic sub plot. With strong story telling gifts, Downing takes us into the quaint and elegant world of war-threatened England of the 1940s. Not only does he take us on a trip to some of the most evocative corners of England, but he also captures the sense of imminent loss that must have been part of that time and place. We sense, as we do in Lewis’ science fiction novels, an ancient world of an England long gone–a world that is vulnerable in the face of modernity and fragile in the face of a second world war.

Published by Ignatius Press, Looking for the King is an excellent publishing adventure in itself. Good fiction writing has never been harder to find and never been harder to get published and sold to the public. Ignatius are to be commended for being adventuresome enough to step into publishing good solid fiction–a yarn that weaves Christianity into the story naturally without it ever becoming preachy or moralistic.

Buy this book. Read it. Recommend it and ask David Downing and Ignatius Press for more!