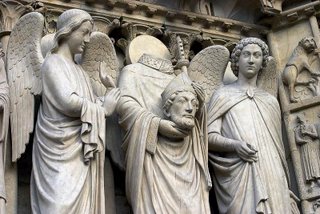 St Denis was martyred in Paris around 272. The legend says after his head was cut off he got up and walked two miles carrying it until he got tired and laid down to die. This led to an old rhyme:

St Denis had his head cut off, and after that
He walked two miles without his hat.

Which makes me think that it’s not a bad thing to lose your head from time to time. We’re so staid and cautious in all things. We’re so careful and wary of emotion, or doing anything radical. Well, why not go crazy for Christ sometime? Why not lose your head and walk barefoot to Mass or give away a thousand dollars when you can’t afford it, or fast on Friday instead of eating your tasty tuna sandwich and feeling self righteous, or read the Bible through from cover to cover–even the detailed rubrics of Levitical sacrifices…(pull the fat from the left kidney and throw it in the fire, then toss the entrails over your right shoulder…) or give money to that tramp who asks rather than saying snootily, “He’ll probably just spend it on drink.” So what! if you were in his condition wouldn’t you want to spend it on drink?

Isn’t ‘losing your head’ the essence of martyrdom? The martyr does something radical and (by the world’s standards) irrational. Go for it. Lose your head for St Denis’ Day and see if you don’t feel better for it.