Mantilla the Hon on Being Rigid

Mantilla the Hon on Being Rigid 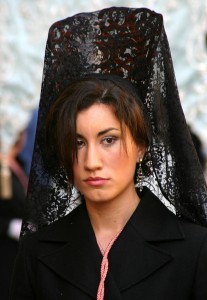 Now everybody is scared of being too fancy.  I even had a priest call me and whisper that he likes Veritas Vestments, but he thinks maybe he should be getting some new chasuble made from polyester, and he wants to know if I can sew some grapes and wheat on the front. I don’t know what happened hon. The connection on the phone suddenly go dead.  You know what I mean?

Anyway, we are doing just ok. Some one call himself an Anglo-Catholic calls me. I don’t know what that is hon, so I look up in my English dictionary and closest thing I can find is call an “angler” so maybe I am thinking this is a Catholic priest who likes to go fishing. Maybe an Angler Catholic is a fisher of men or something like that from what Jesus say in the gospel. But this Angler Catholic wants some nice vestments made so and we have a little bit of work for now.

I’m thinking Papa Francisco is a good man and a good priest, but maybe not such a good pope. I like how he help the poor people, but where is he getting his vestments from? Believe me hon, the closets in the Vatican have got some very nice clothes, but if they have the vestments organized by decades this pope is not digging further than the 1980s. This is not a good sign.

Then he is calling young people like me and my friends “frigid” because we like the old Mass. So what is “frigid”? I look it up and I am more confused so I ask my fiancé Augusto and he laugh and say, “Don’t worry Mantilla. You are not frigid!” Then he says I get the word wrong and the pope is saying “rigid” not “frigid.”  Still I am confused so  Augusto explain. He say ” Rigid means stern and stiff. The Holy Father calls it “rigid”. I call it having backbone.”

Ok hon, I understand, some of those boys who go to the Latin Mass with us, they are a little bit scary maybe. They go around with their hair combed and their suits buttoned up. I wonder sometimes if they wear their necktie to bed. Me? I like the mantilla, but there’s a time and place for everything. Some of these girls look like the mantilla is not enough and they would really like to wear a burka if they can.

But these are just a few of them hon. You and me, we know that the young people like the traditional Mass because it is better to talk to Jesus. Let me tell you hon, these other young people. They do not want to go to Mass to watch their mothers and fathers up front warbling and wobbling to 1970s folk music. No. And they don’t want to see an old priest with combover hair and a mustache telling jokes and making them feel guilty because they don’t save the rainforest.  They want the priest to make them feel guilty for the old fashioned sins like sleeping with their girlfriend, gossiping or being mean to poor people.

OK hon. Maybe I am rigid, but like Augusto say, “Better to be rigid than a jellyfish.”

Mantilla the Hon on the Crystal Cathedral