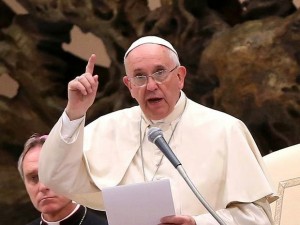 A Detroit newspaper published this slap to Pope Francis accusing him of insulting young Catholics who like the Extraordinary Form of the Mass.

Millennials are leaving religion in droves, recent surveys find. Churches are roiled, but it appears Pope Francis isn’t worried he may accelerate the exodus.

The “Who am I to judge?” pope recently told an interviewer that he has a hard time understanding why so many young Catholics worship in Latin on Sundays. “Why so much rigidity,” Francis asked. “This rigidity always hides something, insecurity or even something else.”

It would seem that even the secular press are getting weary with Pope Francis scolding the faithful.

Surely we should be happy that young people are enthusiastic about their faith. Of course we all know some traditionalists who are, shall we say, somewhat uptight…but to accuse everyone who likes the Latin Mass of being “rigid” is just silly.

What worries me most about Pope Francis using the “rigid” term to slap people is that it is so reminiscent of the bad old days of the 1970s, 80s and 90s when seminary rectors would kick guys out of seminary for being “rigid”. One would hear horror stories of seminarians who would be accused of being “rigid” because they wanted to start a group in seminary to pray the rosary, or they were “rigid” if they spoke out against modernist Biblical theory or because they thought the priestly discipline of celibacy was a good thing. The worst stories were of the young men who went to seminary only to find that the place was infested with predatory homosexuals, and if they resisted the advances of the older homosexuals they were kicked out of seminary for being “rigid.”

When Pope Francis uses this term to scold young Catholics he unfortunately associates himself with all those tie dyed 1970s and 1980s liberals.

I have recently watched The Crown on Netflix and greatly enjoyed one of the bits of advice from the crusty old Queen Mary to the young Queen Elizabeth. She says something like, “The most important quality you will need as Queen is to keep your mouth shut.”

It’s not bad advice for a Pope either.

The fact of the matter is, I don’t really want the Pope to speak out all the time, express his opinion and have informal press conferences on airplanes. I’m quite happy for him to be a distant, avuncular, monarchical figure who waves, smiles, blesses people, kisses babies, visits poor people and from time to time defines and defends the faith once delivered to the saints.