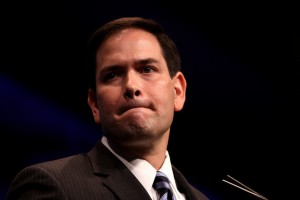 Like many cradle Catholics Marco Rubio has also benefited from the high octane, no compromise Christianity of conservative mega churches.

This article at the Huffington Post records Rubio’s interest in Miami’s Christ Fellowship.

After a short spell in the Mormon Church, Marco Rubio started attending the large Baptist Church, but has finally returned to his roots in the Catholic faith.

According to the article Marco Rubio is a bottom line, conservative Christian.

Bruce Wilson, the author of the article, makes a great fuss over the fact that the pastor of the Miami mega church as well as the Catholic Church believe in the possibility of demon possession. With large quotations from mega church pastor Rick Blackwood he writes,

Such ever-present “evil desires” can lead to addiction. Accordingly, Christ Fellowship has a men’s group that helps those so-afflicted to fight their “predisposition to [sexual] addiction”, a “Men’s Sexual Integrity” group that meets every Thursday at 7 p.m.

But in the case that small group therapy should prove inadequate to the task, Christ Fellowship has another therapeutic method, exorcisms — the expelling of demons that possess people and control their behavior, by bible verse reading.

One of the root causes of addictions, sexual and nonsexual, is demon possession according to a 2011 Christ Fellowship sermon by pastor Rick Blackwood titled “Demon Possession.” As Blackwood describes,

“Satan’s agenda is to seduce people away from God; to seduce them away from the heavenly Father, and then to take control of that individual. One of the ways that Satan accomplishes that is through what the Bible calls demonic possession. Make no mistake about it: Satan’s angels can seize control of an individual and possess an individual physically, spiritually, and even mentally.”

It’s gripping stuff. Per Blackwood, those demons are everywhere but they’re very subtle. Rather than making people crazy, they opt for sneakier ways of driving people from God; the demons undermine people’s ability to think logically:

The article reveals more about Bruce Wilson than it does about Marco Rubio or his religion.

What it reveals is how cut off the mainstream media are from ordinary Christian people. The fact of the matter is that the vast majority of Americans are Christian believers and the vast majority of us do actually believe in the possibility of demon possession. We believe that demons do influence people to commit sin and they do poison people’s ability to think straight.

This does not mean that we are all crazy medievalists. We have simply admitted to a supernatural, spiritual dimension to life and in doing so we are not only in the majority of Americans in the world today, we are also in the majority of most human beings who have ever lived in any culture anywhere.

The astounding ignorance of members of the mainstream media is only exceeded by their arrogance.

To believe in malevolent supernatural forces in the world is not to suspect devils hiding under every sofa, nor is it a matter of assigning all evil to the devil.

We are quite prepared to admit the reality of ordinary human evil in the world. We know there is such a thing as mental illness and a human will to devise and to choose evil.

However, in our experience there is such a thing as demonic influences and it is the Christian church’s job to deal with such things in the world.

Marco Rubio will therefore connect much more easily and happily with the majority of ordinary Americans than the elitist millionaire Hillary Clinton will every do in her phony trip across America to “listen” to the people.

The possibility of demons in modern day America?

I’m a firm believer in that reality, and as the 2016 presidential campaign unfolds I expect we will see plenty of evidence of their machinations.