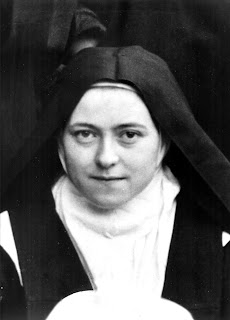 From my book, St Benedict and St Therese–The Little Rule and the Little Way.

At the beginning of my journey to Jerusalem I had stopped in the Northern French town of Lisieux simply because I had heard of Thérèse of Lisieux and the map said, ‘pilgrimage centre’. As an Anglican convert from American fundamentalism I knew next to nothing about Saint Thérèse of Lisieux . I’d read snippets about ‘the little flower’ and concluded that the simpering little girl who said a rosary bead every time she went up the stairs was not really to my taste. The first impressions of Lisieux did little to straighten my wrinkled nose. The road up to the ugly basilica was crammed with souvenir shops clattering with dangling rosaries, holy pictures, and lots of Thérèseian tat and papal paraphernalia. Inside the huge church I was turned off by people lighting candles in front of an arm bone of the saint. There was more to come. In the convent church a figure of Saint Thérèse lies in a glass coffin surrounded with roses like a prop from a Disney film. Near the convent I went into a darkened side room and saw her hair, her habit and her writing desk. It seemed all too much like a visit to a wax museum.
I was beginning to be interested in this little saint, but I was still repulsed by a devotion which seemed both alien and tasteless. As an American I thought the French should know better. Nevertheless, I took a room in the Hermitage—a pilgrim’s hostel next to the Carmel where the saint lived and died. That summer evening I went to bed with the window open. I woke up at about three in the morning. The moon was full and a light breeze was blowing the net curtains at the open window. I was immediately wide awake and aware of a ‘presence’ in my room. The presence seemed to be female and extraordinarily joyful. I am not one for waking dreams and have never had a vision, but I sat up in the bed acutely aware that I was being introduced to something or someone good. I got the impression that the positive presence was that of the saint herself. I sat awake, curious and alert for about a quarter of an hour before the feeling faded and I went back to sleep.
The next morning, remembering my revenant,  I visited the book shop, bought Michael Hollings’ biography of Saint Thérèse and read it on my journey. I was doubtful about my night-time experience and put it down to a vivid imagination. However the experience was disturbing enough to make me remain open minded about the whole business. As I read, my feelings about Thérèse went from sceptically negative to grudgingly positive. I concluded that as usual, if so many people thought she was great it must be me who had got it wrong. By the time I got to the end of the book Thérèse’s brilliant spirit had begun to win me over. When I discovered that she prayed for priests I wondered if I had indeed met her on that summer midnight, and stopped to ask if she might pray for me too, even if I was not a full member of her family.
PatheosDwight2011-10-01T10:31:00-04:00October 1st, 2011|Categories: Patheos|0 Comments