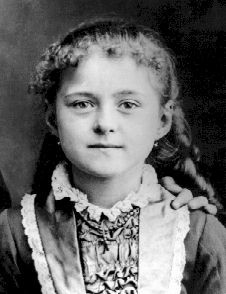 Someone referred to me the other day as “larger than life.” I’m not quite sure if it was a compliment. I think what they meant was that I charge around on one of my many projects and woe betide anyone who happens to be in my way. Either that or they were saying in a nice way that I’m an arrogant, self centered know it all. I suppose it’s true. I’ve often been accused of being arrogant or aloof, when all I thought I was doing was minding my own business.

Either way, I think it would be better to be “smaller than life” than “larger than life”. Being truly little is the way of St Therese and St Benedict. See that little girl? She is showing you the way to Jesus, for he says, “Unless you become as a little child you cannot enter the kingdom.” The door is little and low and the sign on the door says, “No grown ups allowed.”

However, what does it mean to be “little”? It means to be truly and completely oneself. Humility mustn’t be confused with obsequiousness or abject servility. If we have a personality which is naturally a ‘behind the scenes’ type of person, then when we’re in a supporting role we’re being humble and seem humble, but if we are naturally a leader, and individualist or creative person it may be false humility to constantly put ourselves in a background role.

The heart of being little is service to others, and we serve others best by being totally ourselves–transformed by grace to become fully ourselves. This is what St Therese did. She became a saint not by becoming someone else, but by becoming fully herself, and we do not become saints by trying to be totally like St Therese, but be being totally who God made us to be.

This is why it is so delightful that St Jerome and St Therese and St Francis are all celebrated within the same week. Three utterly different saints could not be imagined, and yet all three made holy by God.  Each one pursued the path of becoming little through their own set of circumstances, their own path of obedience and their own cross of suffering.

Likewise with us. If we take our faith seriously, then we will have to become little. Notice that the gospel does not say we ‘may’ become little as if that is just one of the ways to heaven. It says that we ‘must’ become as little children, and that hurts. We want to be powerful grown ups. It hurts to become little, but it is the pain of the Almighty Sculptor chiseling away at the stone block that is our heart–bit by bit chipping away everything that does not look like a saint. Through the circumstances of our lives, through our joys and sorrows and hopes and fears the work is being done if we allow, the work that will make us into ‘Christians–little Christs’–each of us an image of the image of the unseen God.