Mercy, Mercy Me. Things Ain’t What They Used to Be

Mercy, Mercy Me. Things Ain’t What They Used to Be 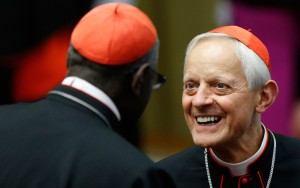 I’m having problems with the present talk about mercy in the church.

Of course I don’t have problems with the Divine Mercy, but the way some churchmen and the press are using the concept of mercy to twist the Catholic Church’s teaching and practice.

Consider this headline: Cardinal Wuerl: The Catholic Church is moving from legalism to mercy. There are so many problems with this article that is difficult to know where to start. First of all, as far as I can see Cardinal Wuerl never said this. The journalist did.

Secondly, notice the intentional contrast between mercy and law. The two are not in conflict. How can you have mercy on someone if there is no law to start with? It is the law which teaches us the need for mercy. I fear what we are being sold is a form of “mercy” which is simply lawlessness. “Mercy” is being used as a shorthand for “you can do what you like” and all the talk about “discernment” and “discussion” and “dialogue” and “accompaniment” is hogwash. It is simply a lie designed to relativize every moral decision and bring in situational ethics through the backdoor of a twisted concept of “mercy”

As a Protestant I was told that Catholic don’t read the Bible. Increasingly I fear that my Protestant teachers were right about that. St Paul very clearly explains the relationship between faith and the law. Read Romans 10 and Galatians 3. He says that the law was given as a “schoolmaster” to bring us to Christ. He’s referencing the Roman custom of a tutor who would be hired to walk the schoolboy to school where he would learn. He says that Christ fulfills and completes the law. The law is therefore necessary not as an end in itself, but as a means to bring us to faith in Jesus Christ.

The transaction works like this: through the law we come to know our sin. Without the law we would not know what sin is. Therefore the law is necessary as a doctor’s diagnosis is necessary to know what our illness is. Does that news come as bad news at times? Sure. Would you feel good when the doctor told you that it was cancer? Continue Reading