MSM and the Slaughter of the Innocents

MSM and the Slaughter of the Innocents 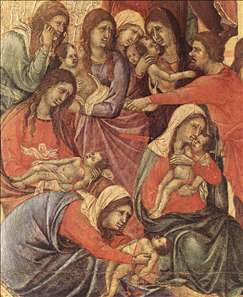 Mark Steyn comments here about the left wing Mainstream Media being so crass and cruel as to mock the death of Rick Santorum’s newborn child. He says how the left are all big on “empathy” in order to defend abortion, but they are quite willing to mock Sarah Palin’s child who has Downs’ Syndrome and the behavior of the Santorums after the death of their child. I wonder if anyone else noticed how sneering they were toward Sarah Palin’s daughter being a teenaged mom who kept her baby while at the same time they are full of  “empathy” for teenaged moms who choose to kill their baby.

Robert Royal also comments over at The Catholic Thing. It reminds me of another feast in the Christmas Season which did not get enough attention. Each year we celebrate the Slaughter of the Innocents on December 28. This feast, it seems to me, ought to be used more by the Pro Life Movement as a national day of prayer and reparation for the crimes against the unborn in our land. We’re a nation of little Herods–willing to slaughter the little ones who threaten our prosperity and power.

Later this month I’ll be in Washington for the March for Life, and will join thousands of others in the campaign against the slaughter of the innocents in our land. I’ll be blogging and tweeting from the MFL, and hope you’ll follow me there and I hope to meet many of you if I get the chance.

In the meantime, ponder how the liberal media would have reacted to the news in Judea around 4BC: Todd Unctuous would have written something like, “Have you heard some snotty nosed farm workers came in from the hills to Bethlehem the other night? Geesh, what were they smoking? They come shuffling down with stories about “angelic hosts of heaven” appearing to them. Not likely. Haven’t they ever heard of group hallucination? Then they turn up at a little shed where a homeless couple are camping out for the night. The unwed mother is being looked after by this old guy, and that’s kind of creepy in itself. What’s he after??? She gives birth (the anti aborts would say she ‘chose life’) and all I can see is that there is another squawking mouth to feed, and who’s going to pay for that I ask you? The taxpayer as usual…Not only that, not long after these three aristocrats show up looking for ‘the King of the Jews’. Quite sensibly they go to Herod’s palace.


We have to admit that Herod is not everyone’s cup of tea, but hey, nobody’s perfect! At least he’s a strong ruler. He’s canny. He’s nobody’s fool. We can respect that in a ruler. He’s calm under fire. He has the backbone to make tough choices for the sake of peace. These three foreigners tell him a new king of the Jews has been born and Herod takes the tough, but sensible decision. There’s no room for two kings, so he weeds them out. You can’t make an omelette without breaking some eggs, and if we can avoid a civil war or a rebellion a few years down the line–who’s complaining–anyhow, what about the famines we’ve been having? Those children were likely to grow up in poverty and misery. And the women? Why should those women be punished by having a child? They’ll look back on it in a few years and realize that Herod did them (and all of us) a favor.”