Spiritual Warfare and the Atom Bomb

Spiritual Warfare and the Atom Bomb 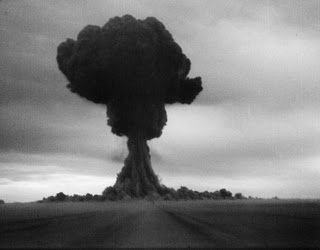 In 1987 I went on a personal pilgrimage hitch hiking from England to Jerusalem staying in monasteries on the way. I had many amazing experiences, and one of them was to stop at Nevers in France to see the incorrupt relics of St Bernadette. I’ve told the story before of how I met an unusual American woman who told me all about Bernadette and how I experienced the odor of sanctity. You can read that here.

But I don’t think I have told many people that another person I met there at Nevers was a Catholic nun who survived the atomic bomb being dropped at Hiroshima. She sat next to me at dinner and told me how she and her sisters survived despite everyone else around them being killed. I wish I had had the sense to write down her story and stay in touch, but I was living that summer very much in the present moment, and didn’t record everything.
Today I had a comment from a reader in England that reminded me that we are engaged in a war of cosmic proportions. The spiritual war is of greater magnitude and importance than the A Bomb. Here’s the story she shares:
“Eight Jesuit priests survived the searing hurricane of blast and gamma rays during the atomic bomb explosion in Hiroshima, Japan, in 1945. They were in a rectory only 8 blocks from the blinding center of the nuclear flash. Although everyone within a mile radius perished, all survived and they attribute their survival to the Rosary and living the Fatima message.
This is the incredible story of the late Fr. Hubert Schiffer, as retold by a priest who met him:
On the morning of August 6, 1945, he had just finished Mass, went into the rectory and sat down at the breakfast table, and had just sliced a grapefruit, and had just put his spoon into the grapefruit when there was a bright flash of light. His first thought was that it was an explosion in the harbor (this was a major port where the Japanese refueled their submarines.)


Then, in the words of Fr. Schiffer: “Suddenly, a terrific explosion filled the air with one bursting thunder stroke. An invisible force lifted me from the chair, hurled me through the air, shook me, battered me, whirled me ’round and ’round like a leaf in a gust of autumn wind.” The next thing he remembered, he opened his eyes and he was laying on the ground. He looked around and there was NOTHING in any direction: the railroad station and buildings in all directions were leveled to the ground.


The only physical harm to himself was that he could feel a few pieces of glass in the back of his neck. As far as he could tell, there was nothing else physically wrong with himself. Many thousands were killed or maimed by the explosion.


After the conquest of the Americans, their army doctors and scientists explained to him that his body would begin to deteriorate because of the radiation. Many of the Japanese people had blisters and sores from the radiation.


To the doctors amazement, Fr. Schiffer’s body contained no radiation or ill-effects from the bomb. Fr. Schiffer attributes this to devotion to the Blessed Mother, and his daily Fatima Rosary. He feels that he received a protective shield from the Blessed Mother which protected him from all radiation and ill-effects. (This coincides with the bombing of Nagasaki where St. Maximilian Kolbe had established a Franciscan Friary which was also unharmed because of special protection from the Blessed Mother, as the Brothers too prayed the daily Rosary and also had no effects from the bomb.)”
PatheosDwight2012-01-12T07:36:00-04:00January 12th, 2012|Categories: Patheos|0 Comments