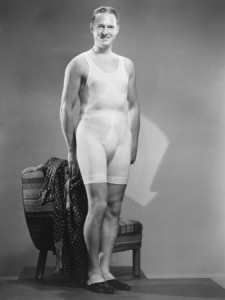 Believe it or not, today is National Underwear Day.

Wearing underwear is not only civilized, but it has many practical purposes people haven’t thought of.

Can’t be doing with another baby just yet?

Do away with all those calendars and charts and thermometers, and simply keep your underwear on.

When I was working as a high school chaplain I used to tell the boys in my homeroom that they had three totally reliable and Catholic approved contraceptives: their belt, their zipper and their trouser button.

I could have added a fourth: their boxers.

People don’t need contraceptive pills and potions if they keep their pants on.

Which raises the more serious question about self control. We seem to have the idea that every sexual desire must be fulfilled. Every urge must be gratified. Every craving must be satisfied and every crevice serviced.

Whatever happened to self control? In fact every society in every place in every culture has insisted that in some way the sexual urge in human beings must be channeled, disciplined and controlled.

This human self discipline for a higher cause Catholics call “chastity”.  The virtue of chastity is the attempt to first accept and live by the teaching that sexual relations occur only within marriage. Everything else is off limits.

This was not only to obey God’s commandments, but to strengthen the family, order the chaos that results from un disciplined sexual profligacy, and allow pro creation of the species and the citizens in the best and most secure and stable way.

Perhaps on National Underwear Day we ought to emphasize that people should not only wear underwear but continue to do so.