Of Anchorites and Stylites in Lent

Of Anchorites and Stylites in Lent 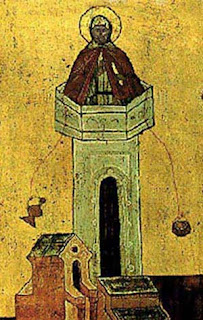 I have never understood the aversion most Christians have to fasting. Say the word ‘fasting’ and you get distasteful and alarmed expressions, as if to say, “Good heavens! That’s rather unnecessarily extremist isn’t it?” One suspects that they think you go in for ‘physical mortifications’ of other kinds like flagellation or living in a cave or wearing a hair shirt or rolling naked in the briar patch or becoming a stylite.

I should add as a parenthesis that I think our modern society could use a few more troglodytes, hermits, stylites, anchorites and so forth. The sort of crazy religious nuts we have are usually terrorists of some sort–whether it is the loonies from the Westboro Baptist Church or Muslims who get teenaged girls to blow themselves up in order to kill a few other folk. Just musing–maybe if we had more properly holy religious extremists it would provide an outlet for those folks who want to do something crazy for Jesus, and maybe the reason we have crazy murderous religious loonies is because nobody gave them the opportunity to be an anchorite and be immured in the wall of a church, or become a stylite and spend thirty eight years on top of a pillar in the desert the way St Simeon Stylities did.

Instead we cultivate a nice, cosy, middle class shopping mall kind of religion in which we all shine our shoes and comb our hair (if we are blessed with such) and troop off to church on Sunday (unless of course there is something more important to do) and think about being good for an hour and then go home and live as we wish for the rest of the week. In doing so we believe ourselves to be very good, forgetting that it was the ‘very good’ people who were the wicked ones who killed Jesus.

Alas, here is the perennial paradox of the gospel–in today’s Mass reading it says that the ‘just one’ has come to confront the evil doers, and in the gospel Jesus is seen confronting the Scribes and Pharisees which reminds us that the ‘evil doers’ were good people. They were the establishment; the priests, the scholars, the teachers, the board members, the bankers, the well to do, the well connected, the well off, the well, well, well–we’ll all go to hell people.

And this is where a little bit of extremism (if that is not a contradiction in terms) could do us some good. If were were more radical in our love for Jesus it would be impossible to be one of the good people who are actually evil doers. Perhaps we need to do more Catholic things that are embarrassing. I have been tempted for some time to go to downtown Greenville on a Friday evening and do some street preaching. When the Franciscan Friars of the renewal are in town with their beards and bald heads and rough robes and a fire in their belly I want to run off and join them, but when I asked they said that they couldn’t really be doing with the wife and children.

So I try to fast and pray more–but I’m not supposed to tell you that–and I wish to do something radical for God again. Like the time when I was first an Anglican curate and suddenly had a pay check. I had lived by faith for four years as a student really and truly not knowing where the money would come from to pay my school bills, and then I had a pay check which was rather boring. So my brother Daryl (who is still more of a radical than I am) said I should give half the pay check away. So I did and we saw miracles happen.

Well, this is a rambling post, but it is my way to encourage myself and encourage you to keep up with your Lenten fast–whatever it is–and when you get a chance do something radical for God. Fast totally one day. Really try it! Write a check for $100.00 or $1,000.00; or if you are very wealthy anyway for ten times that amount and give it to the poor. Get up off your Laodicean backside and go do the Stations of the Cross or pray the rosary more of just spend time on your knees before the Blessed Sacrament.

You’ll be glad you did, and who knows, next Lent might be your opportunity to spend forty days on top of a pillar.