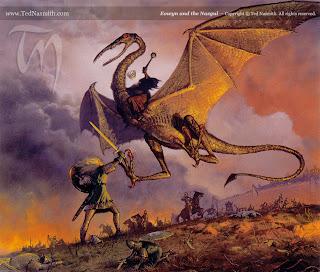 Tolkien loathed allegory. It was too obvious; too blatant; too literal; too dead. In allegory one thing means one thing and that’s it. Myth, on the other hand, is alive. It’s a real story with the real ambiguity and complexity of real life. Tolkien’s world is multi-layered and yet full of Christian meaning all the same.

See Eowyn? When she slays the dragon she is the valiant victor over evil prophesied in Genesis 3:15. There, where woman is defeated by the serpent it is prophesied that the seed of woman will trample the head of the serpent. In the film version the Nazgul hisses, ‘No man can slay me.’ Eowyn removes her helmet, shakes out her hair and sneers with victory, ‘I am no man!’

At that moment the Christian story comes alive again, Our Lady Eowyn reveals Our Lady Mary who also, with her meek victory and humble strength reclaims the battle as the second Eve and tramples the serpent’s head.