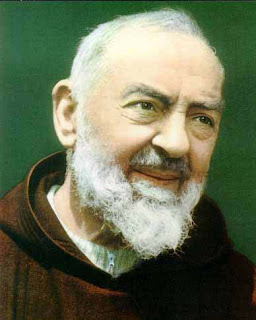 A reader asked me if I had any idea who the patron saint of mystery writers would be. I’m sure I don’t know. I once had a book listing all the patron saints–which made a very entertaining read–but lent it to someone who forgot to return it.

My nomination for patron saint of mystery writers is Padre Pio. This is because he once saved a woman from being murdered. Her husband was planning her death, and went with her to church to seem nice and holy, and Padre Pio met them. Through his gift of second sight he knew what the man was planning and said, ‘Do not shed innocent blood!’ The man was so astounded he repented immediately.

Not only is this a great miracle story, but it reminds me that the Catholic Church can always outdo Hollywood. Remember the Spielberg-Tom Cruise film Minority Report that came out a few years ago? The premise was that in the future three mystics with second sight would be able to predict murders before they happened. They were hooked up to a computer (sort of like one of those dumb Scientology mind reader machines) and our hero went out and about apprehending murderers before they murdered.

Forget it Tom. Padre Pio beat you to it.