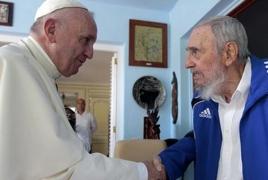 Funny how they thought it was wonderful when Popes JP2, B16 and Francis all paid a visit to Cuba and knocked on Castro’s door.

History is now showing that Pope Pius XII put up stout resistance to the Nazis as he was able.

Pope JP2, Benedict XVI and Francis have taken a more diplomatic approach to Castro’s regime–visiting the murderous tyrant and hoping by diplomacy to do some good.

Pope Francis went so far as to express “sorrow” at the death of Castro.

Pius XII handled Hitler with diplomacy as well, but think of the brouhaha if Pius XII would have written to the Hitler family at the dictator’s death expressing “sorrow” at his loss.

To be consistent, shouldn’t the secular media be finger pointing and name calling Francis as “Castro’s Pope”?

But no, in True (deau) style most of them are giving the Cuban Mao a hero’s send off and presumably think Pope Francis is a marvelous fellow.

Don’t get me wrong. I think Pope Francis struck the right tone in being personal and pastoral, but it wouldn’t go amiss in the days to come if our Catholic leaders and media people were a bit more clear about Castro’s horrible legacy.

Furthermore, in addition to the personal condolences to the family of the deceased it would be great to hear an official statement from either the Vatican or the Cuban bishops along these lines:

While we greet the death of any person with sadness, and offer sincere condolences to the family of Fidel Castro. We pray for the repose of his soul, hoping that in his final hours he may have turned to Christ Jesus in repentance and faith.

We also offer our prayers and condolences to the families of those he and his regime imprisoned, tortured and murdered. We pray that with his departure the shadow over Cuba might be lifted and true freedom and prosperity will be established for all Cubans.

Will we hear that, or will we be presented with some wishy washy Liberation theology mumbo jumbo?