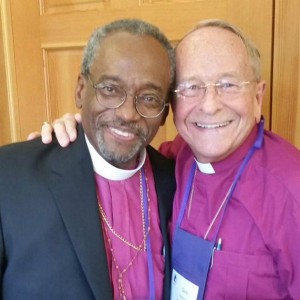 Presiding Bishop Michael Curry of the Episcopal Church has stated that they have no intention of reversing their decision to endorse same sex marriage. The AP reports,

In a phone interview from England, where he attended the gathering of top Anglican archbishops, Curry said he told his fellow leaders they should expect no change. The top Episcopal legislative body, called General Convention, last year voted overwhelmingly to authorize same-sex marriage ceremonies in church.

Furthermore, Curry said he thought it was the Episcopalians mission to convert everybody to same sex agenda acceptance.

Curry said the church was resolved to work toward building acceptance of same-sex relationships throughout the Anglican fellowship, which the Episcopal Church represents in the United States. A majority of Anglican leaders at the meeting affirmed the teaching that marriage is only the union of a man and a woman.

“We are loyal members of the Anglican Communion, but we need to say we must find a better way,” Curry said. “I really believe it’s part of our vocation.”

Bishop Curry’s definition of “loyal members of the Anglican Communion” must be somewhat flexible. In fact, there are now about 150 different Anglican style churches which are “not in communion”. You can go here to sample them.

Some of these churches are fairly large, affluent and international. Some are tiny. Most are run by schismatic lunatics whose proto cathedral is in their Aunt Mildred’s garage.

When one really looks hard at the Episcopal Church why should they be regarded differently than any of the other 150 or so Anglican style churches?

These churches “not in communion” are known for renegade prelates who do whatever they like and hold whatever unorthodox opinions they like. Their known for having wacky ideas and the idee fixe that they are the right ones and nobody else could possibly be right. They are religious eccentrics who often have a persecution complex, a dodgy academic history, an obsession with the “validity of their orders”, a fondness for titles of dignity, a touching vanity of grandeur and a taste in outlandish vestments.

Seems Episcopalian to me.

Meanwhile,the Archbishop of  one of those breakaway groups, The Anglican Church in North America, was at the Canterbury meeting this week and was fully involved in the discussions although he did not vote. Episcopal News Service Reports,

Archbishop Foley Beach, the leader of the Anglican Church in North America (ACNA), has been gathering with the primates for conversation throughout the week but not participating in any of the votes. Beach was invited by Welby in an effort to avert a boycott from conservative African archbishops such as the one that occurred at the last Primates Meeting in 2011. ACNA is composed largely of former Episcopalians who chose to break away from the Episcopal Church. Some African primates have declared their affiliation to ACNA.

ACNA is the largest of the recent Episcopal breakaway groups and they have been instrumental in making alliances with the African bishops. It would seem that they have a possibility of stepping into the vacancy that will be left when the Episcopal Church is finally rejected from the Anglican Communion three years from now.

If this were to happen, then the strong (and wealthy) Anglican Church of North America would be increasingly aligned with the African bishops providing a strong alternative to the old school Canterbury-New York alliance. If the Anglican shift to Africa therefore becomes and American-African shift, then the future of the Anglican communion looks even more interesting.

Finally, the Anglican Church of North America and GAFCON–the confederation of Anglicans who have stood up to Canterbury–are predominantly Evangelical and Protestant in their theology. This augurs a further shift away from the old liberal, establishment high church school of Oxford-Cambridge-New York-Canterbury Anglicanism.