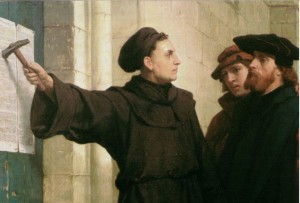 Martin Luther at the Wittenberg Door

My article for Imaginative Conservative this week challenges the idea that the Reformation was “a good thing.”

A Catholic friend of mine is fond of referring to the Protestant Reformation as “the Deformation.” Well, perhaps. Certainly the Reformation in England was a deformation. Henry VII’s stripping of the altars was not only a monumental act of iconoclastic vandalism, but the cultural revolution brought about by his break with Rome—which included the dissolution of the monasteries and his daughter Elizabeth’s reign of terror—was a precursor of the horrors of the French Revolution or Mao’s cultural revolution in China centuries later.

The year 2017 will mark the five-hundredth anniversary of the beginning of the Protestant Reformation. It is right therefore to look again at the events and their consequences, and assess our terminology, for what historians benignly call the “Reformation” was indeed not only a revolution, but the mother of all revolutions.