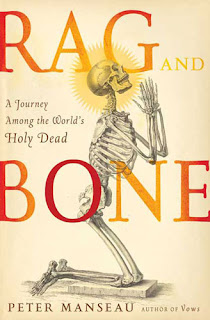 I was sent a copy of  a new book called Rag and Bone and asked to review it. I read everything people send me as I reckon that’s one of the best ways to keep an open mind.

Rag and Bone is a book on relics.
Now, if it’s about relics or incorrupt bodies of saints or miracles, I’m up for it. I’m intrigued by everything wonderful and wacky about religion. Whether it is serious or silly I’m delighted by it. Mother Theresa appearing in a bagel? Hindu elephant gods drinking milk? Apparitions of Mary or the golden tablets of the Mormons and the angel Moroni? Religion which denies the possibility of the supernatural isn’t religion at all, it’s rationalism. Religion involves the inexplicable, and I like the idea of sifting through it to sort out the divine from the devilish, the insane from the inspired and the fraud and fake from the genuine article.
Peter Manseau, the author of Rag and Bone, seems to have the same curious sensitivity. His book promises to explore the whole world of relics in every religion, and to introduce us to this particular type of peculiarity.
Manseau is editor of Search magazine–a non sectarian journal that explores the interface of faith and science. He is also a doctoral student and lecturer in religion at Georgetown. Once this is considered, Manseau’s approach is understandable.
He has not set out to write a devotional book that inspires the faithful, nor has he attempted a faith-based overview of the subject similar to Joan Caroll Cruz’s famous books on the incorrupt bodies of saints and Eucharistic miracles. Instead his book is part memoir, part travel book, part investigative journalism. He attempts an objective approach to the subject for the general reader. He comes at it from unusual angles and surprising starting places. This is both the book’s strength and it’s weakness.
The book is an enjoyable read, and some of the fascination with relics is akin to the same instinct that makes us slow down for car wrecks. There’s something intriguingly vital and visceral about corpses, body parts and skeletons on display. I enjoyed Manseau’s travel stories and was interested in the other religions that venerate relics, but as a Catholic what seemed to be missing was a really in depth theological treatment of why we venerate relics.
Manseau spent a good bit of time on the more ludicrous relic stories, (like the prepuce of Jesus) but I was looking for a serious consideration of the more amazing stories of genuinely incorrupt bodies and relics that seem to work miracles. I wanted him to discuss St Bernadette and St Charbel for example. I also wish he had spent more time on the grand daddy of all relics: the Shroud of Turin.
I enjoyed this book and recommend it, but I put the book down wishing that the author had been both more skeptical and more believing. He should have pushed harder to expose and dismiss the frauds and fakes, but he should also have pushed harder into the realm of the genuinely inexplicable, bizarre and stupendous. The book could have taken us more deeply into the realm of the unknown leaving us full of bemused wonder. As it is I felt I had paid a fleeting visit to a curious museum–a sort of ecclesiastical Ripley’s Believe it or Not.
What I’m digging at is this: Manseau has written a good book. He writes well and is creative, but his standpoint remains within the detached, bemused, ‘objectivity’ of the world of conventional academia. Such a bizarre topic would have been better served with a more ‘off the wall’ style and standpoint. In other words, the book could have stood us on our heads, but I felt it only stood relics on their head.
Nevertheless, this is a good book which treats its subject with an openly pleasant curiosity and reverence. It is not an in depth, scholarly treatment of the subject. In the meantime, Rag and Bone is an enjoyable book on a fascinating subject. Give it a try.
PatheosDwight2009-04-16T11:39:00-04:00April 16th, 2009|Categories: Patheos|1 Comment