The Rosary Around Poland

The Rosary Around Poland 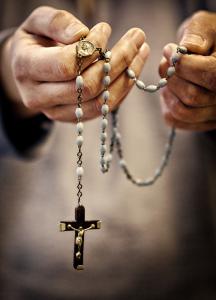 To celebrate the Feast of Our Lady of the Rosary this weekend millions of Poles surrounded their country in prayer.

The news that a million Poles encircled their country with prayer in a public witness was a powerful reminder of the struggles that face Western countries with a Christian heritage.

They were commemorating the Battle of Lepanto–a great victory of minority Christian forces against an invading Islamic army. In doing so they were also standing up against what they see as an invasion by stealth of millions of Islamic immigrants.

However, while remembering the victory won through the power of prayer at Lepanto, we should also remember the role the Poles played in the victory over the forces of darkness twice before–at the Battle of Vienna and in the fight against communism.

On my blog I’ve written about Polish heroes in the past and how they have defended the faith. Go here to read the whole article

For the Feast of Our Lady of the Rosary I’ve also included some resources for praying the rosary. Go here to connect.