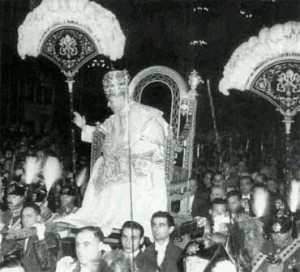 My article for Aleteia this week explores the idea of a monarchical papacy.

Is the pope a monarch? In what way does he stand for the kingdom of God? Should he wear a crown?

Seated like a monarch on his throne called the sedia gestatoria the pope would be carried by a squad of men shoulder height. Servants surrounded him waving ornate fans called flabellum—made from ostrich or peacock feathers—an ancient sign of an oriental potentate dating back to the time of the Pharaohs.

Pope Paul VI was the last pope to wear the triple tiara and be carried on the sedia gestatoria. Since then popes have opted for simpler presentation—turning away from the trappings of a royal court in favor of simplicity and accessibility. Their doing so runs parallel with a more down to earth approach for most royal houses across the world.

Despite his simpler approach however, is there part of the pope’s ministry which should be that of a monarch? The first pope Peter was a simple fisherman and Jesus was a carpenter. Was it a mistake that any popes assumed royal power and status down through history? Is the pope a monarch in any way?