Sin? There’s Nothing Original About It

Sin? There’s Nothing Original About It 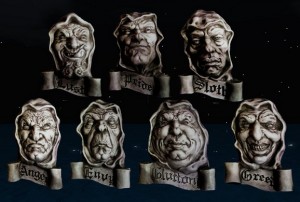 What I mean is that there is nothing new or fresh about sin. The devil never created anything.

He can’t create anything new. All he can do is twist and distort something that already exists.

C.S.Lewis points this out regarding human creativity as well. While we are very creative, he says, we don’t have the capacity to create anything genuinely original.

You can’t create a new color, but you can create new blends of existing colors.

If you take a science fiction film, for example, when the writer tries to imagine an alien being he either ends up creating an amorphous blob of something like an octopus or else he builds the alien from stuff we already know. So the beast is a huge insect like creature, but with an elephant’s nose for arms. You see what I’m getting at–any creative act on our part is a re-fitting and new combination of stuff that already exists.

So it is with Satan. Because he’s a creature and not the creator, he can’t make anything new, and because he’s evil he can’t create any fresh and positive combinations of what exists. Continue Reading