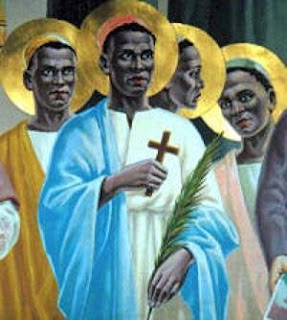 Charles Lwanga was the head of King Mwanga’s household in Uganda in the 1880s. King Mwanga was a notorious sodomite and kept a household of boys and young men for his pleasure. When his Christian steward, Joseph Mkasa rebuked him, King Mwanga had him beheaded. Charles Lwanga stepped up and tried to protect the boys at court and instruct them in the faith. Eventually the king found out what was going on and ordered them all to be killed. The story of their martyrdom can be read in detail here.
As President Obama declares June to be LBGT celebration month the martyrdom of Charles Lwanga and his companions on this day seems horribly ironic. Here is an African saint and his brave young companions who died to preserve purity and to take a stand against pedophilia, euphebophilia and sodomy and today an African American President of the United States declares a whole month in which Americans are supposed to celebrate not just sodomy but lesbianism, bi-sexuality and trans genderism.
The decadence of nineteenth century Uganda led to violence, torture and death for those who stood up against it. I don’t know of one faithful Catholic family who has not had to go through some kind of difficulty in the present decadent sexual climate in our country. If you believe fornication and co habitation and artificial contraception and abortion and lesbianism and homosexuality and sodomy and pedophilia and euphebophilia and trans vestitism and trans gender and the rest of the whole long list of perversions are wrong, and if you stand up for purity and marriage and life and faith and goodness you may not be tortured and killed, but you will be thought a fool.
You will be called ‘judgmental’ by other Christians and other Catholics and other family members. You will be labelled ‘legalistic’ ‘out of touch’ ‘lacking in compassion’ ‘arrogant’ ‘cruel’ and ‘unChristlike’. As the world continues to go it’s way faithful Catholics will increasingly be seen to be like Amish people: brave crazies who cling to an out moded way of life for bizarre religious reasons.
Take heart. It’s only when it takes some guts to be a Christian that the faith really prospers. Remember the gospel is only good news when it is subversive, and each one of us will be called to take a stand. Pray for the courage to do so, and pray for the courage not to be a hypocrite yourself in these matters.
St Charles Lwanga, pray for us.
PatheosDwight2009-06-03T10:59:00-04:00June 3rd, 2009|Categories: Patheos|0 Comments