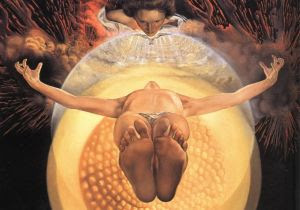 When I was an Anglican vicar on the Isle of Wight in England I was in charge of two ancient churches: Brading and Yaverland. To please as many people as possible I kept the worship at Brading more ‘middle of the road’ and then at Yaverland we were ‘higher’.

Therefore, I kept the extra weekday feast days at Yaverland, and it was to Yaverland we went to celebrate Ascension Thursday, with incense and hymns from the New English hymnal and a fine little pipe organ and Victorian ecclesiastical finery.

Here’s what was good about it: First of all, it felt special because it was a great celebration Mass on a weekday evening. Because it was special we had a nice picnic lunch together after the Mass. There’s nothing quite so nice as an English summer evenin for an event like this. Furthermore, there was something special about the people who took the trouble to come to Mass on a Thursday evening. I don’t like to categorize but they were, well, the committed ones. They were the ones who really cared and really wanted to be there. As a result, the worship was especially fine. The singing was more fervent, the attention to Mass was more intent, the participation was better and the level of shared feeling at the Mass was higher than usual. In every way, by celebrating Ascension on a Thursday evening the event was made special and wonderful.

Yes, yes, I know every Sunday is special and wonderful….but to plop Ascension (and the same is true of Epiphany and other feasts that are now transferred) into the next Sunday is to say that you don’t really think it’s special at all. The other problem with this is that the whole thing is conceived by a sort of Catholic legalism. The argument goes like this, “It’s a mortal sin to miss a Holy Day of Obligation. We can’t say it is not a Holy Day of Obligation because it is and has been. So let’s make sure they don’t commit a mortal sin by changing the Holy Day of Obligation to a Sunday.” It’s that weird kind of double think that used to be called Jesuitical (except I don’t want to malign the Jesuits because I know one or two really good Jesuits)

Couldn’t we be sort of Jesuitical in the same way but backwards and have the Mass of the Day, but have Ascension hymns, a sermon for Ascension and all the trimmings? We could invite people to the ‘Not the Ascension Day Mass’ and tell them that it is not a Holy Day of Obligation and that they don’t need to be there, but that the people who don’t want to celebrate Ascension on that day would be very welcome to attend…

I’m not really suggesting this by the way…in case anyone suspcts me of being a secret dissident, or thinks I should scuttle back to the Anglican Church if I liked it so much.