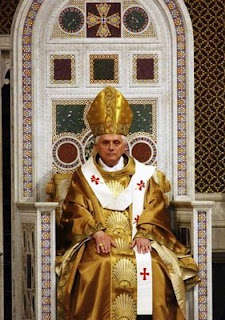 From time to time I receive an email from a Protestant Christian who is trying to pick a fight with me about this that or the other. Maybe it’s papal infallibility or their idea that Catholics believe in salvation by works, or maybe it’s lighting candles or ‘worship’ of Mary, or maybe it’s indulgences or the Inquisition or some other old chestnut.

Here’s my stock response: “Thank you for your question. I’m afraid I don’t engage in debate with non-Catholics because I find it unfruitful. However, if you would genuinely like to learn more about Catholicism and have open and honest questions I’d be delighted to do my best to answer them. However, there is one topic I am willing to discuss, and it is my question to you: ‘Why should your version of Christianity be the right one and the other thousands be wrong?’

The bottom line is the authority question. Where do we turn for the answers? The Protestant will say, “To the Bible.” But this begs the question. We then have to ask, “But which interpretation of the Bible?” The tens of thousands of Protestant Christian groups and millions of Protestant Christian individuals all say, “To the Bible!” yet they all disagree. So how can that simple and noble answer be correct? Others will cry out, “But if you simply read the Bible and pray for the guidance of the Holy Spirit the clear and simple word of the gospel will be made abundantly clear to you!” Alas, that is what all the other tens of thousands of groups and millions of individuals say, and what they really mean by this is, “The Holy Spirit will reveal to you that I and my group are right and the others are wrong.”

Others will resort to individualistic sentimentality. “You will know in your heart a great and sudden peace!” or “You will have a great joy when you come to finally understand the truth!” How wonderful to have a positive and glowing religious experience, but alas, such things are easily counterfeited not only  by self-deceiving wishful thinking, but also by religious charlatans, well meaning religious preachers who sincerely believe the religious experience they are manipulating people into is genuine, and also various forms of synthetic emotion producing chemicals, and when all is said and done the bottom line question still remains, “And how do you know that the emotion you have experienced is a valid emotion and the peace or the joy or the certainty you know in your heart, while powerful and convincing is not fraudulent in some way?”

Linked with this is a similar response: that is a certain and confident ‘inner knowledge’. “I just know that this is right, and I can’t explain it!” cries the enthusiastic believer. While such experiential knowledge is admirable the question still remains, “Yes, but how do you know that your feelings of certainty are based on anything other than wishful thinking or a fleeting emotion or the suggestion of that feeling by a teacher or preacher? Indeed this is a favorite tactic of Mormon missionaries. They say, “Just read the Book of Mormon, and before you do pray to the Holy Spirit and ask him to reveal to you the truth of what your read.” Then, hey bingo! Lot’s of people say, “Its true! I just prayed to the Holy Spirit to reveal the truth of what I read and suddenly my eyes were opened and I understood that it was all true!!” Hogwash.

Finally there is the response which makes appeal to the simple words and concepts of the gospel. “Surely we can leave on one side all these complicated and divisive questions. Isn’t the main thing that we all try to love one another and love Jesus the best we can? Isn’t that really what the simple gospel of the simple carpenter from Nazareth would have wanted?” These are noble and beautiful sentiments, but again they beg the question and evade the difficulties. Apart from the objection that this reduces Christianity to being nice and good, one needs to insist on the necessity of the ultimate question and say, “Yes, but how do you know that you are actually loving Jesus, and not your own fictional version of what you want Jesus to be? How do you know you are not worshiping a Jesus made in your own image? You must have some sort of belief or dogma as well as your good life or how is your life to be distinguished as Christian, and if you have some belief then how do you know it is the one which will lead to your souls salvation?”

This is the bottom line question between Catholics and Protestants, and it is the question that I have never once had even the beginning of a satisfactory answer from a non Catholic. In fact, most often they cannot even seem to understand that it is a necessary or possible question at all.

Without a coherent ecclesiology and a universally agreed, external and infallible authority structure the question cannot be answered and the non Catholic can only resort to subjective sentimentality.

The Catholic answer of an infallible, divinely appointed authority on earth may be difficult to accept, indeed even the suggestion of it will cause scandal and outrage. It may inconceivable for the non-Catholic imagination and may seem awkward and awful in application, but at least it offers a positive and intellectually coherent theory on which an ecclesiology and soteriology can be based.