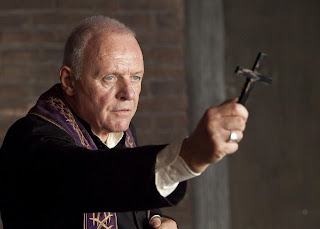 Exorcism movies are now becoming so abundant that they have almost become a sub genre within the horror genre of movies. We’re all becoming familiar with the twitching fingers, the rolling eyes, the growls, the supernatural gymnastics, blasphemies, spitting nails and so forth. This is not to minimize the reality and horror of demon possession, but I think movies like this have a double effect. On the one hand, they remind us of the fact of demonic infestation and the reality of the supernatural. On the other hand, we can become calloused. “Oh yes,” we yawn, “yet another movies about young girls with devils inside them. Ho hum.”
Anthony Hopkins has specialized in roles of men on the edge. On the edge of madness, on the edge of evil, on the edge of the supernatural, on the edge of remarkable goodness. He comes through again with a riveting performance–this time of Fr Lucas Trevan, a down to earth, yet otherworldly exorcist based in Rome. Young American seminarian Michael Kovak (Colin O’Donoghue) goes to Rome to take a course in exorcism and gets involved with the exorcist and his clients. The movies is uneven at places with a plot line that wanders, but on the whole it is a good account of the realities of exorcism. It’s a dramatic movie, so it goes for the high drama and what we don’t see is the more mundane exorcisms, we do glimpse the dreary hard work of repeated ministries and exorcisms that can take days, weeks or months as the exorcist works time and again with a young girl possessed by an especially nasty demon.
So as a movie, it’s pretty good. I like the Roman setting, the cool old architecture and atmosphere of Rome, the fine acting by both Hopkins and Donoghue. The directing is suitably atmospheric and the drama/horror managed in a way that is larger than life, but not too much so. There were little problems with verisimilitude church wise, but on the whole 8 out of 10.
What intrigues me most about exorcism movies though, is how they undermine the rationalistic, materialistic mindset of our modern world. Whenever an exorcism movie comes out what sets it apart from your usual horror film is that it is invariably prefaced with those somber words, “What you will see is based on true events.” Demonic possession is one of those anomalies in the modern world which just “isn’t supposed to happen”. According to modern materialists there simply is no such thing as demons. But after all is said and done, once all the psychiatric tests are run, once all the medical diagnoses are complete, once the person is totally assessed mentally, physically, spiritually and emotionally, a condition exists which cannot be explained any other way. The personality really is taken over by an obscene, monstrous and repulsive entity totally alien to the infested person’s mind and heart.
If this is so, then it is a reminder that our watertight, materialistic little world is a little bit leaky. There are things out there that we cannot account for. Reality is rubbery. What we thought was solid and ‘real’ and dependable turns out to be ephemeral, unreliable and unpredictable. The universe is open ended. There are possibilities we cannot predict and connections that we can never explain. There are patterns and systems that are far greater and more mysterious than our silly, narrow scientific minds can deal with.
If this is so, then religion is the realm of interaction with these things. In religion we grasp the poor tools we have to deal with the unseen world. It is through religion that we make a transaction with the Almighty. It is there that we deal with demons, encounter angels and joust for the salvation of souls. It is there that we face the Realities beyond our small realities. It is there, in the everyday routine of a priest’s work, and in the everyday prayers and sacrifices of the faithful that we battle unseen forces and wrestle not against flesh and blood, but against principalities and powers and the forces of evil in the unseen world.
All the worse then, when religion is turned into some sort of self help therapy session to make obscenely rich middle class Americans feel even better about themselves. All the worse then, when religion is turned into some sort of ideology to make the world a better place and to dish out greeting card sentiments to people already satiated with self love and sentimentality.
No, I’m for what I call ‘crunchy Catholicism’–and more on that later…
PatheosDwight2011-02-01T10:08:00-04:00February 1st, 2011|Categories: Patheos|0 Comments