The Shroud the Pope and the “Strip of Cloth” 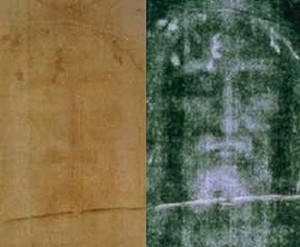 Can the main stream media get any dumber than when they try to report on religion?

This article at CNN reports on Pope Francis’ recent visit to Turin where he prayed before the Shroud.

Pope Francis prayed Sunday before the Shroud of Turin, a strip of cloth that some believe was used for the burial of Jesus Christ.

The shroud appears to bear the image of a man who resembles paintings of Christ.

It’s that last line, “The shroud appears to bear the image of a man who resembles paintings of Christ.”–not only is it badly written but it reveals that the writer knows next to nothing about the shroud itself–which is one of the most extensively researched relics of Christianity.

I’ve written here about the shroud.

Here are some of the basic points shroud doubters have to answer:

Atheists often ask for evidence for the existence of God. I think the Shroud of Turin is the most convincing evidence available if they want scientific, archeological, historical, physical proof.

Why? because an atheist must insist on the natural world being a closed system. Miracles are not allowed. Not even one miracle is allowed.

Because if there is a miracle, then there is an intelligent being outside and beyond the closed natural system.

So if it can be shown that one miracle has occurred, then God must exist, and the most astounding miracle would be the resurrection of a dead person and the only person that happened to was Jesus Christ, and the evidence from the shroud is increasingly intriguing and points to exactly that.

Of course doubters exist and the debate continues. That’s all healthy, well and good, but the more closely you look at the shroud the more difficult it becomes to question its authenticity.