The Temple in the Temple

The Temple in the Temple 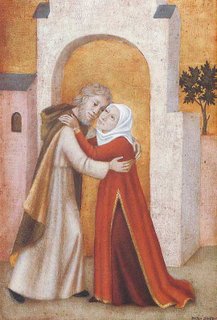 Today is the feast of the Presentation of the Blessed Virgin Mary in the temple. She who was the temple of God is presented to live in the temple of God. The story of Mary’s childhood comes from an extra Biblical source called the Protoevangelium of James. This ‘gospel before the gospel’ tells us that Mary’s parents were godly Jews called Joachim and Anna. The tradition is that they met at the gate of the city and knew that they were to marry.

When she was about twelve Mary was presented to live in the temple. There is evidence that there were orders of holy women who lived in the temple and devoted their lives to worship and prayer. Anna was one such woman. (Luke 2:36-38) In fact, when Anna recognizes Mary and the child Jesus the legend has it that she did so because Mary was once her novice in the women’s order in the temple. Were there actually such religious women in the Jewish tradition at the time of Christ? The experience of the Essene community indicates a vital ‘monastic’ tradition in Judaism at the time. Another intriguing clue is the story of Jephthah’s daughter in the book of Judges. (Judges 11. 31-40) Jephthah made a rash vow to sacrifice the first thing he saw on return from battle, and the first person to greet him was his daughter. Did he actually kill her, or did he make the oblation in form of her service to the temple. When she heard the news she didn’t grieve that she was losing her life, but that she would never marry. Some scholars think that she joined an order of temple virgins, and that such orders existed regularly within the Jewish religion.

The Protoevangelium of James says that the Blessed Virgin Mary joined such an order, and it was within her temple service as a known and vowed virgin that she was met by the angel. This would explain the reason why it was well known that Our Lord was born of a virgin. Mary was not just any young girl, but a girl who was publicly known as a virgin. This would also explain the added scandal of her pregnancy. Not only did a young Jewish girl become pregnant, but a vowed temple virgin became pregnant.

Can we trust the Protoevangelium of James? Isn’t it just a later forgery or one of the many gnostic writings that circulated in the third to fifth centuries? Actually, it is quite early, and its provenance is the area of Jerusalem. Most scholars date the Protoevangelium to the beginning of the second century. This would have been within the living memory of people who may have known the blessed virgin Mary as an older woman. However, we don’t take it as gospel, and for some good reasons. There seem to be later, much embroidered elements to the basic story of Mary’s childhood. In addition, other, more fanciful stories intrude and don’t have the simple veracity of the most ancient gospel accounts. The protoevangelium is quoted by the apostolic fathers and was read in church in the earliest days, but it is second rate.

What we can say is that the Protoevangelium proves the very early veneration of the Blessed Virgin Mary in the church in Jerusalem. Christians from the end of the first century and early second century believed in the miraculous element of Mary’s conception. They believed in her perpetual virginity, they believed in her highly favored place as the Mother of God. It is true that the later, fuller development of Marian dogmas is not there, but the roots of them are, and from these roots our full understanding of God’s working in the second Eve has grown.