The Three Kings and King Arthur

The Three Kings and King Arthur 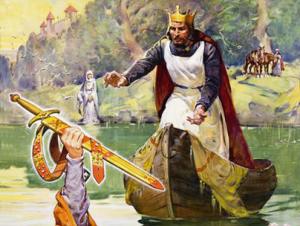 When I lived in England I made a visit to a place in Somerset called the Cadbury Hill Fort. It is an ancient hilltop settlement which, in various times was used as a fort, castle or fortified village. Some historians believe it was the location of King Arthur’s Camelot.

When you visit it can be pretty convincing. We camped overnight and the next morning, rising from the mist was the Great Glastonbury tor in the town where Arthur was supposedly buried. Glastonbury was called the “misty isle of Avalon” because it was a settlement in the midst of the Somerset levels which were often flooded. That morning it seemed like we were looking at the misty isle of Avalon for sure.

However, Cadbury Hill Fort, Glastonbury, Tintagel and the numerous other locations associated with King Arthur are far from the stories and legends associated with him. Historians believe there was such a person, but real, solid evidence is difficult to find. Was he a Celtic chieftain during Roman times or during the later Saxon invasions? Opinions vary.

In Lord of the Rings Galadriel says, “History became legend and legend became myth.” The King Arthur tale is a good example. The stories were romanticized, embroidered and told and re-told endlessly–each time in a new context to a new audience with new angles on the mythopoetic qualities of the story.

This is also what happened to some of the stories about Jesus. The so called gnostic gospels were elaborations of the essential stories about Jesus recorded in the canonical gospels. Like most legend and myth they were mystical, magical and very attractive. In many ways they were more attractive than the real stories about Jesus in the gospels. This can be seen in the way the legends and myths about King Arthur–the endless poems, plays, novels, movies, operas and TV shows are more entertaining than the archeological fragments discovered on Cadbury Hill.

One of the gospel stories most wildly elaborated and most widely accepted is the story of the Magi. In the second to fourth centuries and beyond gnostic writers in Armenia, Syria and Persia wrote fantastic versions of the the infancy narratives. Among their elaborations were the increasingly detailed, mystical and magical versions of the Magi story.

You can see why. For those who are interested in magic, the occult and supernatural, the Magi were key figures. They were exotic Eastern sages, stargazers, astrologers, magicians (the word “Magician” comes from “Magi”) necromancers and soothsayers. They were the Merlins, Gandalfs and Dumbledores of their day, and who doesn’t like a wizard with a strange hat, a staff and a long beard?

However, these mythical magi have as much to do with the true magi story as Merlin and Madam Mim in Disney’s Sword in the Stone have to do with King Arthur.

This is one of the strands of tradition and truth I explore in my upcoming book The Mystery of the Magi. Its a fascinating tale, and I am excited to have done the research and found the true identity of the Magi.

The process was like going on a dig at Cadbury Hill Fort and finding a few traces of King Arthur.