To Live by Faith or Die Hard

To Live by Faith or Die Hard 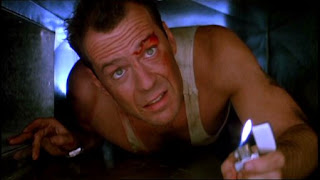 I watched the newest Die Hard movie the other night and realized that the hero, John McCain is running for president. Then I stopped and listened a bit harder: whoops, the Bruce Willis character is John McClane, not McCain. Nevertheless, the comparison is apt. John McCain is campaigning for the Republican nomination as a hard guy. The Vietnam veteran and prisoner of war is here in South Carolina this week giving the impression that he is tough. Pictured next to cadets from the famous Citadel military academy in Charleston, McCain’s strong on national defense, and the conservative, hawkish voters of South Carolina are impressed.

South Carolina is tied with two other states for having the highest number of people attending church on Sunday, and if the proliferation of Baptist type churches is anything to go by, McCain’s going to have trouble with his main contender who is a man of faith. Mike Huckabee, the former Baptist preacher, was here in the Palmetto State on Sunday preaching at a Baptist Church. He’s also been to a pro life center where volunteers try to save babies and save souls. If the Bible belt Christians appreciate John McCain’s tough stance on foreign policy, they also like Huckabee’s Baptist credentials, Southern good ole’ boy affability. His being a Southern underdog standing up to those rich, Yankee establishment types isn’t doing his campaign any harm either.

Fred Thompson was here in Greenville this week. He’s hoping for votes in South Carolina, but if roadside signs are a gauge for level of support he hasn’t got a chance. For the most part Fred’s been most noteworthy here for not being noteworthy.

Bob Jones III, chancellor of BJU here in Greenvile, has endorsed Mitt Romney. Jones is famous for calling both Mormonism and the Catholic Church ‘dangerous cults’. That’s the pot calling the kettle black! However, Jones’ endorsement came when Huckabee was still an unknown. If Huckabee gets much further you can be sure Bob Jones and the rest of the moral majority will jump on the Huckabee bandwagon.

Meanwhile what’s a Catholic Republican to do in the Bible Belt? The only Catholic on the ticket, seems addicted to that fizzy brew, Catholicism Lite. Rudy Guiliani, known for his multiple marriages, sharing an apartment with some homosexual friends, and pro-abortion views hasn’t even turned up. He’s saving his ammunition for the snowbird vote in Florida.

It’s between Huckabee and McCain. The latest polls have them neck and neck at 24% each. Knowing folks in the Bible Belt, I think faith will triumph over national security and I predict Huckabee will win with a comfortable margin.