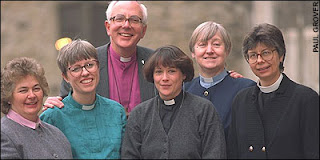 A commenter on an earlier post asked me my opinion of the women priests in the Anglican Church as I worked with them. Were they sillier or more radical or more whatever than the male priests?

One of the interesting findings about the women priests in the Church of England was that they are more theologically liberal than their male counterparts. Women priests were more likely to be liberal in their views of Christian morality as well. This is based on a survey done by Forward in Faith some years ago.

In fact, during the debate over this issue in the Church of England I was resolved to be open minded and fair. I listened to both sides of the debate, and the fact that I did is what led me to the Catholic Church.

How then was one to decide? Was one to take a vote? We did and it really didn’t settle anything. when those who were in favor lost they did not say, “Well, the Holy Spirit has spoken through the General Synod’s vote. We were wrong. The question is settled.” No, they said, “We will have to campaign harder and bring it up again in five years’ time.” When the vote finally went in their favor did those opposed say, “Ah well, the Spirit has spoken, He is leading us into a wonderful innovation in the church’s ministry?” Alas, no. They said, “We want our own bishops. We want our opt out clauses. We shall stay in and fight this abominable innovation.”

For my part, I realized that there needed to be another authority–larger and more ancient than the Church of England General Synod to make the ruling. Then a few years later the Holy Father said very simply and clearly, “The Church does not have the authority to ordain women as priests.”

At that point dear old dunderheaded George Carey, speaking of the Pope’s statement said, “Duhh. We would like to seek clarification on this.”

By that time it seemed very clear indeed. The Church of England had not simply voted in favor of women priests. She had also voted decided once and for all about what kind of an ecclesial body she really was. Any idea that she was a branch of the ancient, one, holy, Catholic and apostolic Church faded like the morning mist in July.