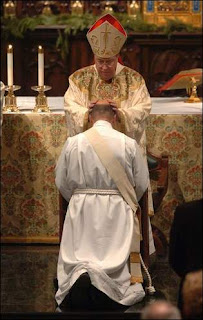 A student asked me today how I knew that I had a vocation to the priesthood. Maybe it would help others to hear the story too;
I was a student at Bob Jones University. In my sophomore year I had found my way to the Anglican Church, and I was praying about what I should do with my life. I can remember not having any idea what I was supposed to do, and I spent time on my knees asking God for guidance. It was then that I got the idea that I should be a saint.
Okay, not only was this ridiculously presumptious (but give me a break I was twenty one) but I’m ashamed to say that I thought this was a good idea because I wouldn’t have to do anything in order to become a saint. In hindsight, I can see that my Protestant ‘sola gratia sola fide’ upringing had fostered in my heart a sort of Quietism. I was simply a leaf in the tide, and if I submitted to God he would do it all. This is true in one way, but like every heresy it is only true in one way, and the reason it is a heresy is that it stresses one truth to the exclusion of others.
Within this context I sought God’s more specific guidance. I had a professor at Bob Jones who successfully combined his academic career with leading services at the Anglican Church, so I thought it would be neat to be an academic, wear a tweed jacket and a bow tie and perhaps teach English and maybe even smoke a pipe and ride a bike to classes. On the weekends I would go to the Anglican Church and take services. All very quaint.
Then one Sunday evening in my senior year I went to the Anglican Church for Evensong. As we knelt in prayer in the warm Spring evening the words of the prayer were read out. We asked that we might serve God, “with simplicity, beauty and singleness of mind.” God shot the words ‘singleness of mind’ straight to my heart, and I knew that I needed to be a priest.
Does this mean I was called to be a Catholic priest? Not necessarily. I was a Catholic layman for ten years before that one became clear. The long story does not need to be told here, but it was a frustrating and confusing time. I felt a vocation to the priesthood, and those around me confirmed it, but nothing happened. For ten years those in charge pushed me from one meeting to another and nothing ever happened. Finally I had a meeting with a kind Catholic priest who listened to the whole long tale of one rejection after another. He looked at me and said, “Do you want to be a Catholic priest?”
My reply, “To tell you the truth Father, yes and no. If it means working with the bunch of idiots I’ve met so far who are in charge then no thanks. But it it means I would be able just once to say Mass or hear a confession, then I want to say ‘yes’ because that must surelyl be the most precious thing any man can possibly do with the short time he has been given on earth.” The priest thought for a moment and said, “I think you should reconsider.”
“Reconsider ‘yes’ or reconsider ‘no’?” I asked.
“Oh! Reconsider ‘yes'” he cried, “We need more priests like you.”
Ah well, there’s the tale–at least there’s the short version. If you are reading this and feel a call to the priesthood or the religious life be prepared–its’ likely to be a rough ride; but then that’s all part of the bargain isn’t it? If you want it easy don’t even think about a vocation.
Choose the broad road. You’ll have lots of company and it’s downhill all the way.
PatheosDwight2007-04-17T18:59:00-04:00April 17th, 2007|Categories: Patheos|15 Comments