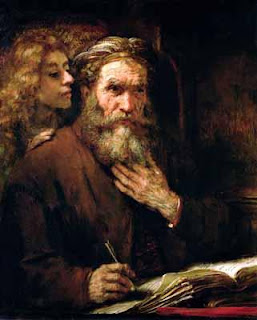 Fortunately, Matthew had it made. As a tax collector for the Roman authorities he had to collect a certain minimum as prescribed by law, but after that he was entitled to take whatever else he could get to line his own pockets. Furthermore, he was given a couple of Roman soldiers to encourage anyone who happened to be not so cheerful about giving as they might.

Unfortunately his choice of trade did not endear him to his fellow Jews. Not only did he work for the hated Roman overlords, but he mixed with the Gentile dogs socially. In addition to that he soiled his hands by dealing with their Roman coinage–each coin of which bore an imprint portrait of the Emperor (who was considered divine). Consequently, for the Jews who were not to have graven images–each Roman coin was a little blasphemous idol because it bore the graven image of another god–Caesar.

So Matthew was scum. How delightful, then that Jesus Christ chose him to be one of the apostles. It should be greatly encouraging to folks like you and me that Christ the Lord chooses the low life, the rag tag rabble, the poor, the grubby and the sinners to follow him. Once he hear the call Matthew got up and followed Christ and left it all.

Now, I wonder (just to be provocative) what it would be like if we regarded our own money as a little graven image. What if we saw that pyramid of power and the pagan all seeing eye of Horus on the back of the almighty dollar and regarded it as a Masonic symbol of the powers of the Novus Ordo Seculorum–the New World Order. What if we saw George Washington’s portrait and did not see the Father of our Country, but saw a Deist, a nominal Christian, an anti Catholic, rationalist Freemason–a master of the ways of this world, and therefore an image of the Lord of this World. What if we regarded the dollar bill as a repugnant idol?

It’s a question which stands things on their head somewhat, and a relevant question too, for what false idol are we most likely to worship in the USA (and in the whole world for that matter) than the Almighty Dollar? Is it not a symbol of Mammon–the god of this world? Does it not hold it’s value because it also holds it’s power? Like all pagan gods, is not the Almighty Dollar a fearsome and violent god, before whom all shall bow?

When asked if they  should pay taxes Christ asked for a coin and asked whose image was on it. “Caesar” they replied. “Then give to Caesar what is Caesar’s and give to God what is God’s”

Matthew’s lesson to us is forget about the way of the world. Seek first the kingdom of God and all those other things will be added to you. Want to be inspired when it comes to giving to others and saying good bye to the great god Mammon? Read Tim Drake’s post here.